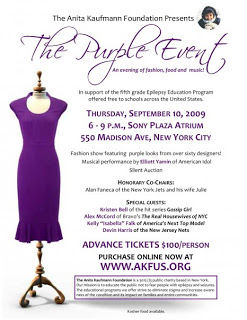 The event is being co-chaired by Alan Faneca of the New York Jets and his wife, Julie. Only 500 tickets are available to the public for this high fashion fundraiser.

Hosted by The Bachlorette’s Jillian Harris

All proceeds go toward expanding the reach of the 5th grade epilepsy and seizure first aid educational program offered for free to schools across the United States.

Purple Day, our newest initiative, was a grassroots effort dedicated to increasing awareness about epilepsy worldwide. On March 26, people from around the globe were asked to wear purple and spread the word about epilepsy. The Anita Kaufmann Foundation teamed up with epilepsy organizations from around the world to help make Purple Day 2009 the best ever. As US Sponsor for Purple Day, AKFUS has created materials for distribution (see www.purpleday.org to download yours!) and hosted a premier Purple Day event on March 26, 2009.

Step Up & Step Out – A Designer Shoe Sale for the Mind, Body and Sole