Xbox 360 Kinect users rejoice! The amazing Zumba dance-party workout is allows incredible fun no matter experience with dance or fitness level. If you love dancing your way to a great body, then you’ll be addicted to Zumba Fitness Rush. This incredibly fun workout, which launched February 12th, features a technologically advanced, feature-rich interactive Zumba® experience. Encompassing exclusive content only available on Kinect (sorry Wii users), with lots of new features and improvements that amp up the dance-fitness play so you and your friends or family, can melt away the pounds as you party yourself into shape!

I had the opportunity try out Zumba Fitness Rush with their superstar instructors including Gina Grant, who is pictured on the game cover (above). Featuring 50% more content than Zumba® Fitness 2 on Wii: more routines, more venues and more instructors, plus voice control, online connectivity and post launch DLC support 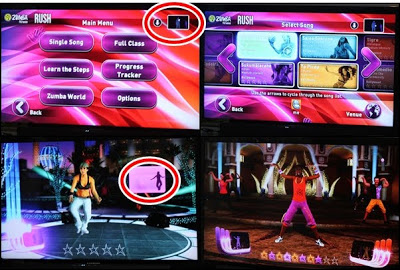 Zumba Fitness Rush allows you to dance naturally hands-free with Kinect technology that enables full body motion tracking (see above circled forms in the screenshots above), for an riveting, freeing, fully-interactive workout. You fully get to use your entire body as your controller. Expect a new video cueing system makes the choreography easier to follow for new players. It also features a new Progress Tracker that records every workout statistic, including calories burned, achievements earned, overall rank and technique score, an accessible gameplay that features Low, Medium and High Intensity routines for all skill levels plus a full Tutorial mode. Get in on the fun action in the video below

Get a total body workout with 42 electrifying new routines and music tracks (10 exclusive to Kinect), now featuring hits from today’s hottest artists including Pitbull, Nicole Scherzinger and Yolanda Be Cool & DCUP, along with contagious Zumba originals that let you lose yourself to the music.

Learn 24 different dance styles as you play (more than twice the number featured in the original Zumba® Fitness game). From fan favorites like Merengue, Salsa and Cumbia to new additions that include Axe, Bollywood, Ragga, Bachata, Latin Pop, Quebradita, Batucada, Pasodoble and more, Rush lets you experience a broad range of cultural rhythms from around the world. Check out the instructors trying out the Bollywood dance routine, which features Erica Pierce, a Zumba Fitness competition winner, who won her chance to be in Zumba Fitnesss Rush

Feel the rush with three different game modes you can play solo or with a friend:
– Single Song: Dance a single routine of your choice from the 42 included in game. The new song
preview feature gives you a feel for each rhythm before you dive in and lose yourself in the
music.
– Full Class: A work-out block of routines in 20, 45 or 60 minute formats. You can now create
your own custom workouts by saving a playlist of your favorite music and choreography.
– Learn the Steps: Revamped tutorial mode lets you learn at your own pace by breaking down the
four core dance styles into the basics. Slow down or speed up each module as you receive
focused per limb feedback that helps you master each move and build confidence.

Earn achievements and unlock exclusive behind-the-scenes videos as you play.
In game class locator lets you find an instructor near you so you can try a live Zumba® class and become part of the community.
Online Zumba® news feature keeps you up-to-date on brand information, events and promotions.
Post-launch downloadable content will offer new dance style packs and hit music via Xbox LIVE.