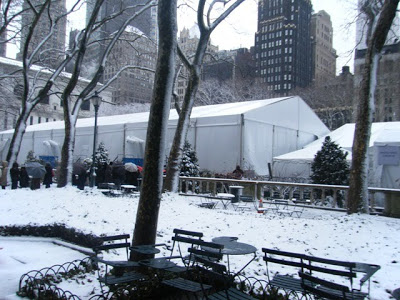 It’s that time of year again when the beautiful people gather to worship the fashion gods – new and existing. That’s right, it’s Mercedes Benz Fashion Week in New York City. Alas, it is a very sad one because it is the last one at Bryant Park (ever…but hopefully not) and it will forever be known as the fashion week that legendary designer, Alexander McQueen committed suicide (a moment of silence for him……….)

Add to the fact that we also had one of the hardest hitting snow storms in history with areas getting 18-22 inches. To show you just how fabulous Mercedes Benz Fashion Week is, New York isn’t going to let a little thing like Alaska-grade levels of snow deter them from attending the shows. For writers/editors/stylists, et al, the first official task (after registering and being approved) is picking up your credentials (for those who don’t know – credentials are the badges/press passes that allow you to enter the tents but not the shows). Credential pick up begins the day before the shows at the tents begin. This time it was on Feb. 10th from 12pm-6pm. I aimed to get there at least 1/2 hour prior to opening but because of the weather, everything was moving at a snail’s pace. Even so, I arrived 10 minutes before noon to this line 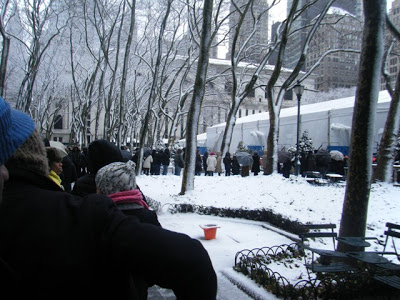 As you can see, many people had the same idea as me and by the time I took these photos, I was far from being the back of the line. Again, even with the snow storm raging on, that wasn’t going to stop us from getting our badges and of course our tickets to the official Mercedes Benz Press giftbag. Anyway, after 1/2 hour or so of freezing rain/snow, I had my badge in hand. As I left I noticed the line was even longer than before as many others were braving the cold.

One of the exciting things for me is when the tents begin to go up, in one second, there is nothing, then a solid white tent 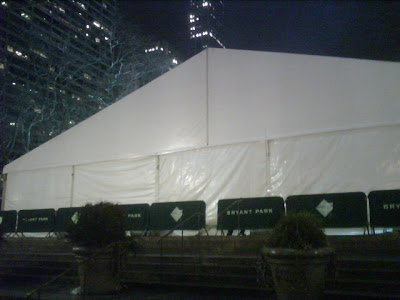 which is eventually transformed into the majical tens that you’re seeing everytime you pass by 6th Ave, btwn 40th and 42nd streets 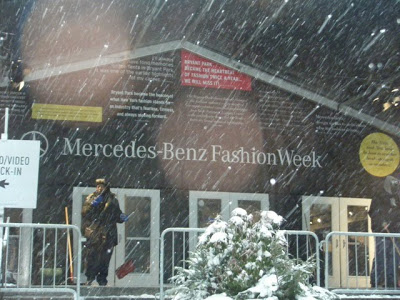 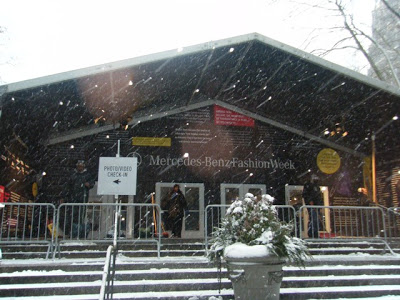 An image we will see for the last time. After Thursday, Feb. 18th, we (and many designers) say goodbye to fashion week at Bryant Park