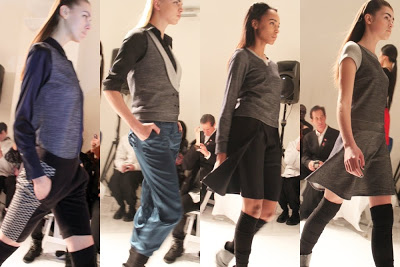 For Fall 2013, 4 Corners of a Circle designer, Natsuko Kanno, was inspired by her Japanese roots, specifically IKUSA (“battle” in Japanese). The complexity and various elements of the armor of the traditional Samurai warrior, and the strength of the battle itself – those inspired her to create a collection of looks for women that are strong, sexy, worldly and confident yet soft and feminine. 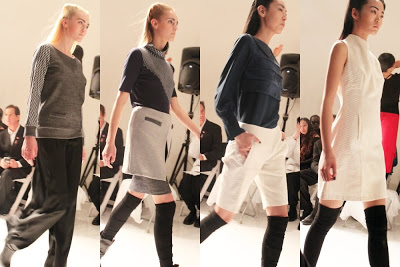 The collection featured, Kanno’s expert silk-screening techniques to design an original arrow print which symbolizes the Samurai’s weapon of choice – “the arrow, over the sword”. For Fall, we saw a warm color palette of full of blues, rich caramel and cream, shimmering silver, charcoal and deep burgundy. 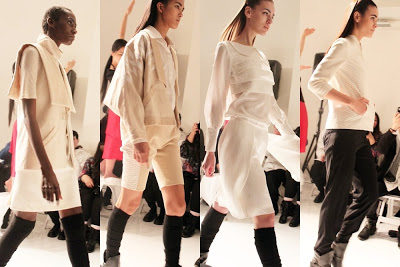 The traditional samurai warrior uniform gets a very modern and casual look, my favorites were the short, double-breasted, wool Yoroi Warrior Coat, with Samurai-inspired cape shoulders (cape shoulders have been popping up in several shows) seen in charcoal, black and herringbone, paired with a chic Wa-knit sweatshirt and a new signature “Hakama” skirt, a heavy wool charcoal caplet with rich wine colored mesh leather details and Kanno’s signature gathered knee-length shorts in herringbone and mesh leather. 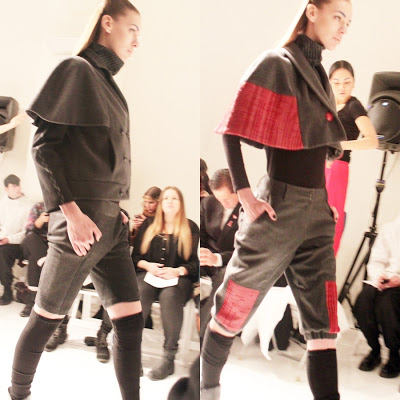 See more from the 4 Corners of a Circle Fall 2013 Collection in the show’s finale video (which I took on my #HTCOne X+ Camera)below: