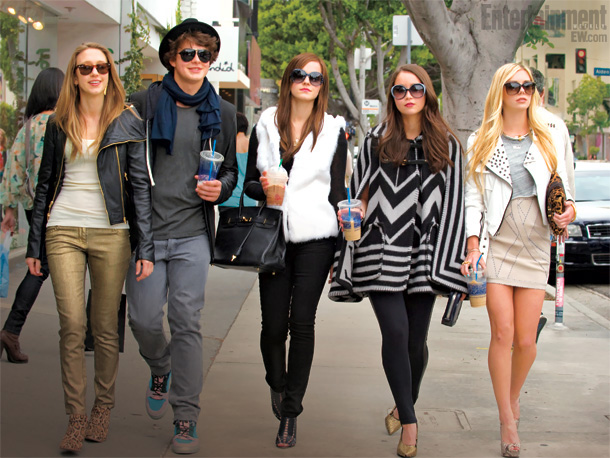 We all know the story, it captivated us for so long and still does today. We know they did it, we saw the aftermath; but in order to fill our need to know everything, we needed to know how exactly they did it. Director, Sofia Coppola does an okay job of presenting her adaptation of the sensational, ripped-from-the-headlines tale of the fame-obsessed teens. She highlights the “fictionalized” true story before, during and after the ring’s infamous criminal activities – though much of the robbery scenes play out the same and it can get a bit repetitive but she does try to add different elements in each robbery scene.

Fans of Sofia Coppola’s work might not care for her directing the celebrity worship film – I’ve overheard a few people say it is too much of a fluff piece for the Director who usually goes for more deeper films – but I find it refreshing when Directors try different genres even if it doesn’t always work out. I can see how this movie highlights how we have become celebrity worshipers – in these teens case, enough to want to be like them so much that they literally dressed themselves in the celebrities’s actual possessions.

This movie definitely questions or at least highlights the morals of the players – so self absorbed that they felt no guilt sneaking into homes and rob them. From their attitudes, you can see they didn’t think of themselves as thieves, which they clearly were. But don’t worry folks, there is no fear of you feeling sorry for any of these them though your heart may twing a bit for the “Nick Prugo” character – the only one who shows a flash or two of regret. Now while the leader and initiator of this Burglar Bunch was the “Rebecca and Marc” characters, Emma Watson’s “Nikki” and Leslie Mann’s “Laurie” were the highlight of the movie for me. Emma Watson played the part of the Alexis Neiers character perfectly. From what we saw in their reality show, Pretty Wild, Emma totally hit the mark as oblivious Nikki and Leslie was spot on as the flighty mom. While I loved the scene with the Vanity Fair interview, I was truly hoping for the infamous phone call scene from Pretty Wild when the article actually came out – that was truly TV gold.

I’d like to end by giving kudos to Paris Hilton for making an appearance in the movie, especially as she was the most robbed celebrity in the entire scandal. Will you enjoy this movie – possibly if you enjoy seeing some mindless behavior of teens. Is it Sofia Coppola’s best work – not by a long shot but I’m happy she’s directing again – hopefully her next project will more like her past work.

The Bling Ring opens in theaters nationwide this Friday, June 21st. Huge thanks to A24 for the invitation to the screening.

Just watched the movie, felt as if the movie dragged on for the most
part, this movie could have been 45min and probably a lot better and
tighter, I feel like they could have done more with the Court Scene or
see what the characters were really thinking (especially REBBECA)…Emma
Watson was really good in the movie, but her role had
huge comedic effect for the most part.