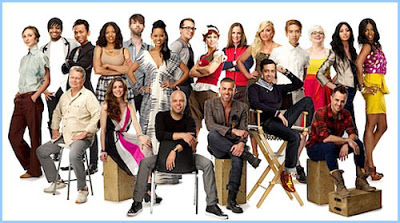 After what seems like a long hiatus, we will soon have our favorite fashion competition show and hosts. Project Runway Season 9 premieres on July 28th at 9pm on Lifetime (I know you’ve seen the commercials) – go to http://www.mylifetime.com/shows/project-runway for more info on the new season’s designers. Looking at the cast, I can’t help but wonder who will be this season’s villain? who’s going to be the favorite? who will have this season’s catchphrase?, etc (see full contestants below)

These thoughts also had me reminiscing about some of the old contestants. I was lucky enough to attend last season’s finale with a friend and while I could only show the finale collections of the actual final three contestants, seven more designers actually showcased their collections. These seven were of course not seen on air, so I want to feature them here in celebration of the upcoming season which I am dying for. So feast your eyes on the finale videos of the other seven designers from Season 8 who showed at the tents

Agabhumi – The Best of Bali