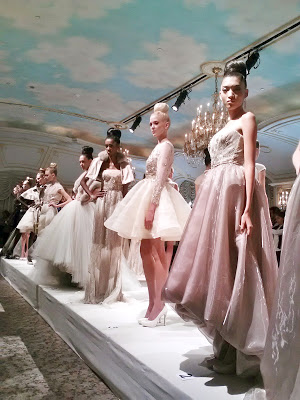 Thanks to another Blogger friend, Kimberlee Van Der Wall of ihaveadegreeinthis.com, who covered the Dennis Basso Spring 2013 Collection for mylifeonandofftheguestlist.com, we get to delve into the designer’s absolutely breathtaking collection. Each look exquisite, the setting enchanting – making this collection a definite favorite during Mercedes-Benz Fashion Week.

Dennis Basso has solidified himself as the “fur guy” with high-end celebrity clients adoring him for over 20 years. He recently launched a line for QVC which includes faux-fur. However, that doesn’t stop him from his elegant designs. Case in point, his Spring 2013 collection presented at the St. Regis Hotel in New York City on Tuesday. Dennis was inspired by Deauville, France where high society gathered in the 60’s during the summer. It was often called “The Riviera of Paris” where people put on their best attire. High society was definitely the look with the venue and the clothes. The presentation was held at in a grand ballroom with high ceilings and decadent chandeliers throughout. 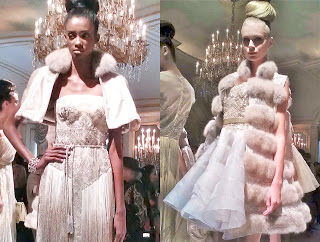 In true Basso fashion, there were plenty of furs including broadtail, sable and chinchilla which were all dyed to match the color palette. Dennis explained that the color palette for the collection was inspired by the sea like so many collections were this season and included blushes, champagnes, pearls, sky blue with metallic accents. I especially enjoyed the tassel details on the looks along with the gorgeous details. The furs he explained were to cover a lady up at night near the cold breeze from the sea. Other noteworthy details included cut ostrich feathers, glass beading, crystal embroidered lace, ombre fringe which was a nice modern take on the flapper look. 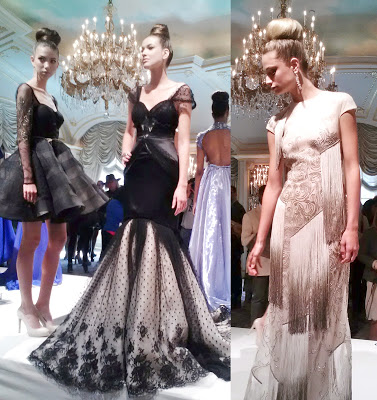 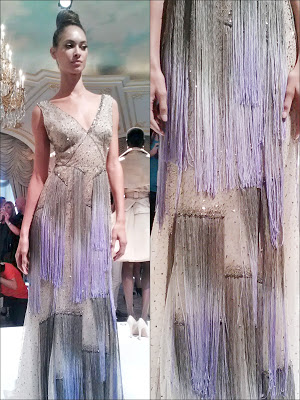 The collection included 24 looks which were all evening related and included several gowns. Makeup was done by Kabuki, hair by The John Barrett Salon at Bergdorf Goodman and shoes were his own design in collaboration with Pour la Victoire. It was nothing short of exquisite with many looks reminding me of the upcoming movie, The Great Gatsby and harkening back to a decade when people dressed to the nine.

4 Corners of a Circle Spring 2013 Collection

you're welcome and thank you for covering for us

Thanks for the opportunity!