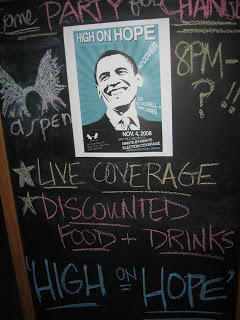 No, I am not talking about the Democrat or Republican Parties. I mean party parties. I was invited to three (really four but trying to attend all four is pushing it).

First up was the Young Professionals United for Change Event held at Providence on 57th Street, which started at 6pm. Dave and I arrived to find a short line, we got our IDs checked but the security wouldn’t let Dave threw because he was wearing sneakers. Not any old sneakers either but Black Adidas Vibe Anniversary Consortium. He couldn’t even tell if they were sneakers, he had to ask another security guy. Anyway, we left, we had two more events to go to so it was no skin off our backs. Zia* and Angelique* did end up going but it seems they left not too long after. They went to the fourth event Dave and I passed on – the Election Party at Jay-Z’s club – 40/40.

Next up on our list was Industry Publicity’s High on Hope Event at Aspen on 22nd Street at 8pm.

Dave and I headed over there, after a quick bite to eat to pass the time. On the way and in between the events, I kept updated via posts on Twitter, which is damn better than CNN, I knew before everyone else at Aspen when Obama won Pennsylvania, New York, Michigan, etc. It also gave me the best line of the night – “Obama = Visine: He gets the Red OUT!!” Hilarious!! We walk in to find a lively crowd (people were constantly walking in and out moving from one election nght party to the next), one flat screen showing the CNN wejavascript:void(0)bsite and the other showing the live news. On the walls were posters of Obama. With a glass of Pinot Grigio, we settled in to watch the nail biting results. 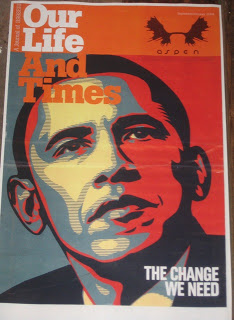 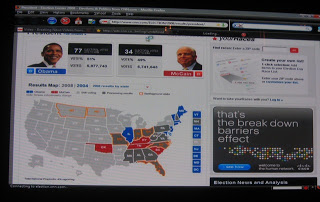 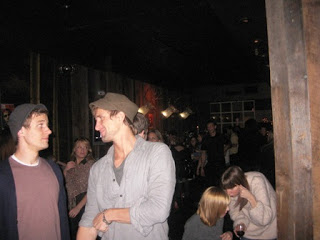 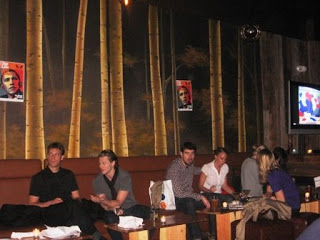 (This is around the time I was getting the amazing updates from Twitter) – like this tidbit, according to MSNBC, 99% of New York voted for Obama. 99%. If that isn’t a clear message that “New York doesn’t want you, Mccain”, I don’t know what is. WAY TO GO FELLOW NEW YORKERS!!! 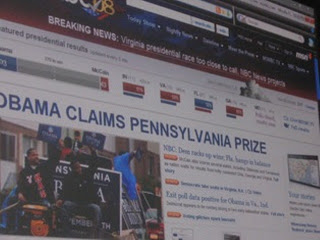 with Ohio not far behind, Dave and I started to make moves to go to the next Election Night Party but first, the update 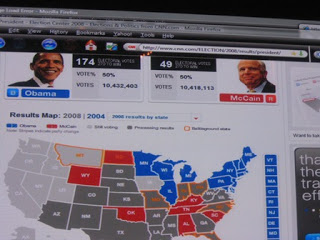 There were a lot of screams at this point, we may have almost broken the sound barrier.

The last and certainly not least, my favorite designer, Tracy Reese’s Hope for a Change Election Party held at her Flagship Store on Hudson St at 9pm. Dave and I arrived to find the store decorated in the American Flag and red, white and blue with copies of Barack Obama on the cover of New York Magazine all over the floor of the window display. 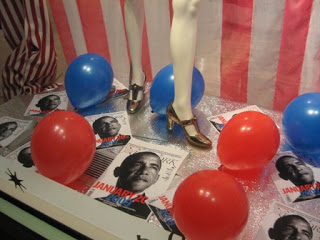 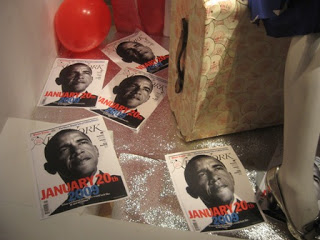 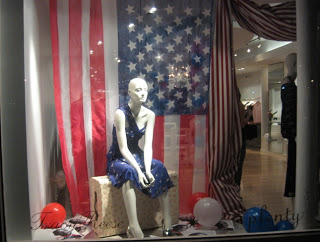 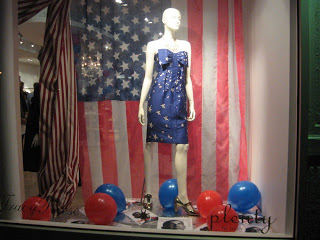 You walk in and the columns are wrapped in red, white and blue balloons and wine and champagne everywhere (there was a great deal of food as well but the election stated getting too exciting to eat much far less take a photo of) 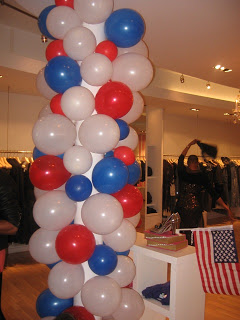 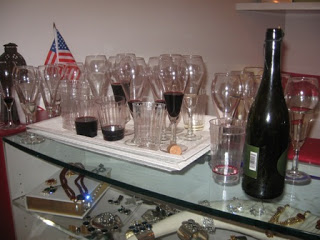 Among the crowd, I spotted Tracy Reese herself and Veronica Webb and snapped a photo 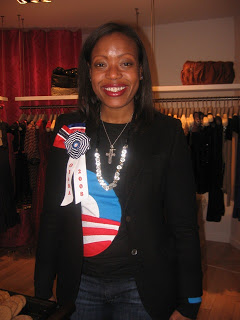 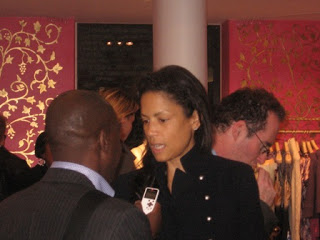 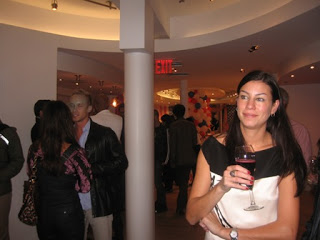 When they announced Obama got Virginia

all hell broke loose because we knew at that point he got Florida as well and seconds later, he was declared the President-Elect.

Throughout the day I’ve heard stories of people who felt the power of voting. I remember four years ago during the last election, all news media stated that there was going to be an amazing voter turnout. It was supposed to set record numbers but it didn’t happen. Not this time around, this is the year for the record numbers, this is the election with the unprecedented “youth and new voter” vote. Even a massive amount of senior citizens, some bound by wheelchairs came out to vote. You could already hear it in the mid-afternoon news, stories of people waiting 5+ hours to vote but not giving up, others heading to the polls at 6 am thinking they’ll be in and out, only to realize they are number 300+ and yet they stayed put. I applaud everyone who is stood in line and those who still were still standing in line mere minutes before their state’s polls close to participate in this election and cast their vote. Long live choices, long live Democracy (REAL DEMOCRACY).

And now we have our first Black President all because we all believed that “Yes We Can”. If you look at the numbers (Barack Obama finished with 338 and John McCain 156), do you realize that if you subtract McCain’s total from Obama’s, the difference is 182, more than McCain’s total? Can you say landslide. And if you ever had any doubt that the right man won, his speech was amazing, he seemed quite humbled by the entire thing.

I am shocked by a few things – I’m surprised that McCain got Louisiana. With everything that happened with Katrina, I just knew the people of Louisiana would use this opportunity to say a big eff off to McCain and the Bush Administration.

The second thing that shocked me (well surprised is a better word) was Jesse Jackson crying in the crowd. After he made those disturbing comments, he basically disappeared, which was good but I couldn’t help but wonder for a second or two whether he was crying because he was overcome at the significance of Obama (Sorry President Obama) being elected or maybe he just wished it was him up there.

The third thing shocked me but I find that I’m not surprised. During McCain’s concession speech, when he mentioned Obama’s name, the crowd booed but during Obama’s speech, when he mentioned McCain’s name, the crowd cheered. This just proves the right people are in charge now and some people are still ignorant. I say “so long, farewell, auf Wiedersehen, goodbye” to them all.

And a very welcome to PRESIDENT BARACK OBAMA 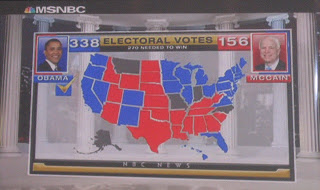 I didn’t cry when Obama was announced as the 44th President, I was way too happy. Everyone (complete strangers) started hugging each other, dancing, singing. I did cry when I saw pictures of the world’s reaction (scroll down). It’s not just black people that wanted this man in office, it’s not just Americans that wanted him in office. IT WAS THE WORLD.

Fast or Die – A 55DSL and Alex Fakso Collaboration