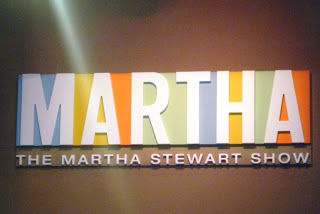 That’s right, I went to a taping of the Martha Stewart Show and guess what…I actually had a good time and they gave gift bags (so unexpected and so awesome). Anyway, the show is taped right on 26th Street between 6th & 7th (never knew that). As soon as you walk up, you see the multiple pastel colors that is used for her show logo. As with most times, Dave was coming with me (he was currently running late), he arrived about 10 minutes before we were let in.

Anyway, after checking our names off the list and going through the whole search and seize process, we were left into a waiting area where we were entertained by a gentleman who turned out to be Martha’s sidekick on the show. Anyway, we wait while he gives us the rules, cracks a few more jokes and then he’s off to do and say the same thing to the next crowd. After another 10 minutes we are ushered into the brightly lit studio 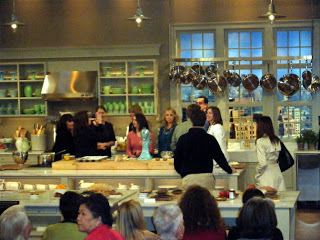 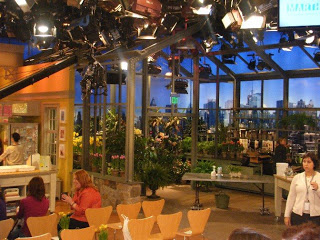 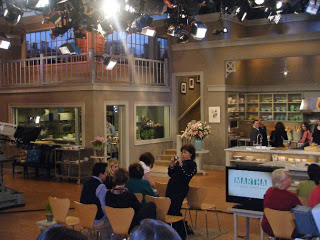 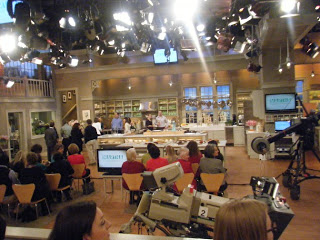 We are shown to our seats which I must say are prime seating (middle second row – cha ching!). While everyone around us is so excited, we’re a bit blase because we cannot call ourselves fans, this was just something to do. but wait, something is not meshing here…..is that Flo’Rida’s “Low” and Timberland’s “The Way I Are playing”??????? at the Martha Stewart???? It’s always been said that Martha likes Hip Hop but damn, I didn’t know how much. Dave and I were chair dancing to Usher, Rihanna, Nelly Furtado, etc. before, during commercial breaks and after the taping was over. Not what you’d expect from Miss Martha at all but with each song, I couldn’t stop laughing at the thought of the prim, proper and sophisticated Martha Stewart dropping it like it’s hot backstage (I dare you to try not to imagine that).

Sorry to say that I cannot say the show topic (don’t want to get sued or anything – we signed something) and we were of course not allowed to take photos during taping but it does air sometime in May. The most interesting thing to happy at this show taping was not Martha’s music or the show itself, it just so happens that one of my formers (we dated on and off for a few years) works on the show. Now I was ridiculously in love with this guy but for some reason timing was not right (I guess). In he walks and I recognize him straight away, my mouth of course drops and I’m a bit apprehensive because we haven’t seen each other in years. So I did what any normal woman would do, for the first 30 minutes, I pretended that I did not see him, which was quite difficult as he was stationed directly in front of us (let’s just say that I am now quite knowledgable on the lights, air ducts, etc of the ceiling at the Martha Stewart studio).

Finally Dave told me that he’s been taking a few peeks directly at me while I was desperately trying to pretend he didn’t exist right here, right now. Finally we make eye contact and look away, this goes on for several minutes until he finally mouths to me “You watch this show?”, I say no. This is our entire conversation during the taping.

After the taping, we were permitted to take photos and Martha Stewart stayed on set to answer a few questions. At first, they said one or two because she had to do her Sirius Radio Show but she actually answered about four audience questions. 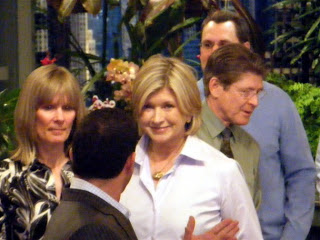 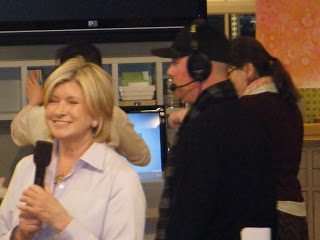 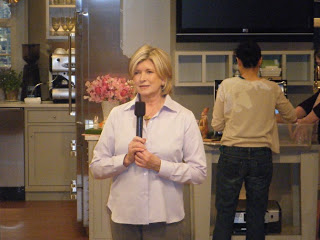 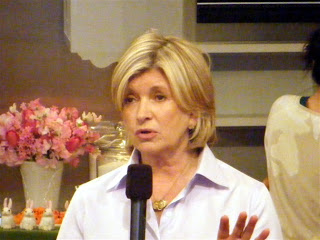 After the questions, we were ushered out and given a giftbag (As I stated before, this was a totally unexpected surprise) and they gave some damn good stuff too 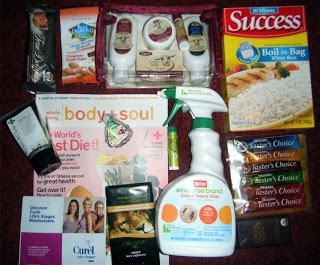 When we walked out, guess who else walked out of another door (no, not Martha, but my former), we talked for a while (Dave excused himself), exchanged numbers and made promises to call (I did, he never called back – oh well)

Deji D, if you want tickets (and live in NY), you can just go to her website and sign up for them

LOL, thanks for saying that

Sorry to disappoint you all but no call yet. I’ve given up…sigh…it just wasn’t meant to be. Why is it that we (maybe that’s just me) never want the ones who wants us and the ones we want don’t want us?

I have always Loved Martha. And always Hated the way she was railroaded into that stock scandal which was a complete… well, never mind. It’s just that it always upsets me when i think of what they did to her.

The music doesn’t surprise me as she’s a pretty genuine gal who rocks, and actually Cares about her fans and friends. (at least, i would like to think so.)

Huh? What? Yep! As a matter of fact, I Am avoiding talking about your former, the same way You avoided eyeing him. (tehe. paybacks are hell. Which is what he is doing now by pretending he isn’t Dieing to call you.)

Ah that is so cool. I’ve always wanted to go to one of these things.

I love that story. He’ll call.