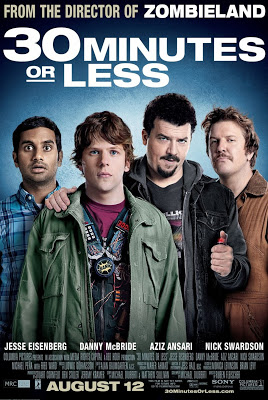 I had the pleasure of attending the press screening for 30 Minutes or Less and although it’s a very short movie by standards (only 83 min), it is 83 minutes of continuous laughter. Directed by Zombieland’s Ruben Fleischer, 30 Minutes or Less is about “two fledgling criminals (Danny McBride and Nick Swardson) kidnap a pizza delivery guy (Jesse Eisenberg), strap a bomb to his chest, and inform him that he has less than 10 hours to rob a bank or else…”

Aziz Ansari plays plays Chet, best friend to Jesse Eisenberg’s Nick and provides several of the movie’s laugh out loud moments – I’m happy to say that Aziz Ansari’s character wasn’t the stereotypical Indian and the movie didn’t rely on that to get the laughs (I hope to see him in more roles). The movie shows that the buddy comedy genre is alive and well when done with actual funny writing and cast. I do hope you are ready for some F-bombs though because it has a touch of raunchy language and an affinity for oral sex jokes. On an amusing note, Jesse Eisenberg makes a reference to Facebook which got a few audience titters.

Of course this movie is not without its controversy and not because of the language. Some say 30 Minutes or Less seems to be loosely based on a real life incident where a pizza delivery man named Brian Wells was kidnapped, had a makeshift bomb strapped to his chest, and was forced to rob a bank – though an article in the Huffington Post states “the movie’s handlers acknowledge the screenwriters were “vaguely” aware of Wells, but say the movie isn’t based on the infamous Pennsylvania collar-bomb case.” Mr. Wells later died when the bomb exploded before police could disarm it. It is also said that Mr. Wells was involved and helped plan the tragic crime with two individuals who were later sentenced to over 30 years in jail for their involvement.

Whether its based on this incident or not, the tragic crime notwithstanding, 30 Minutes or Less is a really funny movie and one anyone will enjoy. The movie hits theaters this Friday, August 12th. Check out the trailer below:

The Screaming O Presents the Chic and Discreet Studio Collection