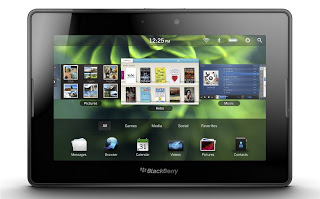 I was just telling my girlfriend how I go to Radio Shack every other weekend and ask for a demonstration (as well as test) the new Blackberry Playbook. I’m telling you guys, this is art right here. It is a beautiful piece of work. The imagery is so clear. The screen is huge (a vivid 7” high-res display), but the actual playbook is small. Does that make sense?

I’ll explain……it measures: 1/2 inch thick and weighs less than a pound. The imagery is so sharp that it appears to be 3D, it’s as if you are actually experiencing and not just viewing the entertainment, weather, gaming system, digital programming or files. The highly-responsive touch screen allows you to simultaneously view videos, web browsers, emails, apps and more. With dual HD cameras for video capture and conferencing and an HDMI port for external viewing, the BlackBerry Playbook offers an uncompromised multimedia experience. This tablet definitely surpasses expectations. Naturally it syncs with your Blackberry devises – via WiFi and Bluetooth. The cherry on top is that it’s only $499.99 for 16GB (also available in 32GB and 64GB versions). I hope to purchase mine very soon (budget willing) and give you guys and update on its function.