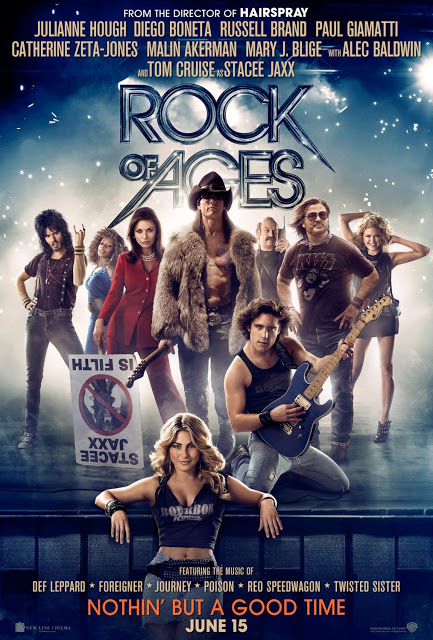 80’s rock and roll Broadway musical, “Rock of Ages” has finally made it to the big screen. Telling the story of rock crossed lovers, Sherrie and Drew, who meet on the Sunset Strip after poor naive Sherrie is robbed of her belongings. Their rollercoaster romance is told through the hard hitting hits and rock ballads from rock favorites Night Ranger, Quarterflash, Foreigner, Def Leppard, Joan Jett, Whitesnake, Journey, Twisted Sister, Bon Jovi, Pat Benatar, REO Speedwagon, Poison, Steve Perry (only a tease), etc.

So are you ready to rock? Musically, you will with the collection of rock anthems in Rock of Ages – special kudos to the man behind the music mash ups. Overall, the songs are what I enjoyed the most of this movie…not necessarily the singing. I fully confess to singing along to the songs especially my favorite, Night Ranger’s Sister Christian at the beginning. Here’s my take on some of the characters, you may or may not agree but you will make your own opinions when (if) you see it:

Julianne Hough as Sherrie – I thought it was just me (it wasn’t) but something about her voice was a bit irritating. I think it may be the combination of the baby voice and high pitch of her voice. I think she shined best when singing Harden my Heart mainly because it sounded like she was singing in a lower key.

Alec Baldwin as Dennis Dupree – seeing Alec Baldwin in jeans is like seeing Alec Baldwin in Dad jeans, it should just never happen. The man looks good in a suit or at least slacks so please let’s try to keep him away from jeans in the future. At first sight of seeing him in character, I laughed, even though I’m positive that is not the correct reaction but it was just off for me.

Russell Brand as Lonny – it goes without saying that Russell Brand in a rock and roll movie is a no-brainer, the man was like a duck in water – seriously, no surprise with this casting choice since most people still think he is a rock star playing comedian. I must also note he had some of the move’s best comedic lines. And oh the romantic scenes between Alec Baldwin’s Dennis Dupree and Lonny are beyond laughable in its awkwardness.

Malin Akerman as Constance Sack – great job and I enjoyed her singing, wish there was more of it. She’s a great actress and was the lead singer in a rock band when she was younger so a perfect natural choice. She would have made a great Sherrie…maybe they thought she was too old to play her….hmmmm

Catherine Zeta-Jones as Patricia Whitmore – she did a good job, I didn’t expect a bad performance. The dancing scene with ladies in church seemed a bit off but I think it may have been how she looked in the peach suit. Her first presence in the movie seemed a bit over acted but I think that is how the character was supposed to be played – she looked like her old Chicago self at the end.

Mary J. Blige as Justice – fabulous job…amazing voice (so surprise there) but I’m giving her a solid B for the acting, mainly because she did much better than I anticipated.

Tom Cruise as Stacee Jaxx – you have to let go of your dislike for Tom Cruise and not let that influence your opinion of how he sis in this movie. I enjoyed his portrayal of Stacee Jaxx (leather buttless chaps and bejeweled codpiece and all). I thought he would come off as trying too hard but he did a good job playing an aging rockstar (as my very limited exposure to aging rock stars and full knowledge VH1’s “I Love the..” series and MTV’s Behind the Music has taught me). My favorites Tom Cruise scenes include any scene with his monkey, Hey man, and wen he was walking towards Malin Akerman’s Constance Sack and a groupie grabbed him and started kissing him mid stride. He let her kiss him while signaling to Constance that he would just be a minute.

If you love rock, go see this movie, if you want to laugh a little, go see this movie. The music alone is worth the price of admission. One one I expected to hear more of was Steve Perry’s Oh Sherrie. I just knew we’d get a extended play of it later in the movie since it’s the lead female character’s name but sorry folks, 3 seconds is all you get. Do you think they felt it would be too predictable to add more of this song in the movie? Could be but I ended up listening to it on my way home because the 3 seconds left me dying to hear it.

All in all, Adam Shankman did a great job, my only real issue is with the sound guys when it came to Julianne Hough. And I got the shock of my life to find out actor Tobey Maguire is a Producer of this film – go figure. Not at all surprised Justin Theroux was the Screenwriter, I love his previous work.

Birchbox and Glamour partner for a “sensational” July box

Holiday Gift Ideas | Gifts That Give Back