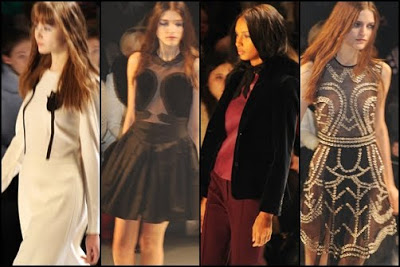 Unlike her Spring 2012 collection which was full of vivid colors and playful personality, Jill Stuart’s 2012 Collection was morose and much more sullen which is understandable because this season’s collection was inspired “the dark, magical world of Nick Cave’s women”. Nick Cave is an Australian musician, songwriter, author, screenwriter, etc whose “music is generally characterized by emotional intensity, a wide variety of influences, and lyrical obsessions with “religion, death, love, America, and violence”. The women in his life are generally described as enigmatic and blasé and this personality trait is what inspired this collection. 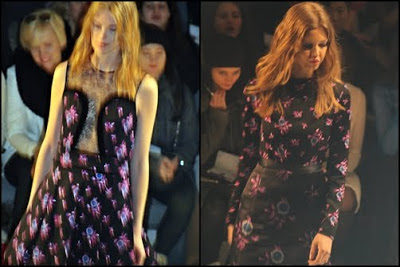 The darker hued looks (which included bordeaux, chocolate, grape, navy, etc) featured dark floral prints and an interesting print consisting of a trio of paint splotches), muted colors, sheer and lace inserts, rhinestones which were placed in amazing swirled designs on sheer dresses and blouses and turtlenecks – several of which were layered under dresses.