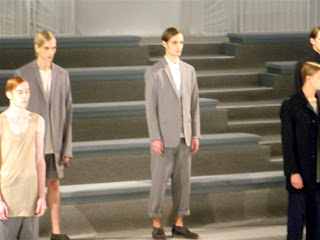 Picture it! July 5, 2011! New York City! 100 degrees in the shade! Outside the shade? Forget about it!!! That had to have been one of the hottest days this summer and of course I was running around the city like a man possessed (I won’t mention that I was in and out of an air conditioned car service, it makes for a stronger story). Anyway, it was hot. Its days like that that had me thinking, how does the urban guy kill a couple of birds with one stone; stay cool and look cool. And if you’re anything like me with that hot island blood, you’ll realize that that is no easy task to surmount.

I am convinced that the designers for Duckie Brown, Steven Cox and Daniel Silver, saw me that July 5th day and thought “there’s a brave New Yorker”. Why? Their collection for Spring Summer 2011 was a brave take on modern dressing for the cosmopolitan man complete with the cool factor. Gone were a lot of the shrunken silhouettes with their higher armholes and “can I get some air in here” pants and in their places were breezy fluid silhouettes that they weren’t afraid to apply that Duckie Brown quirkiness to. 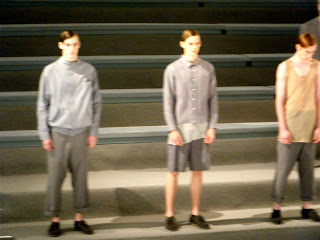 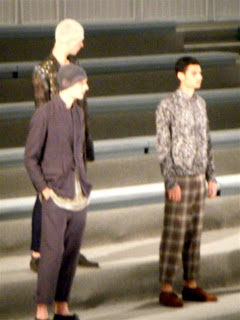 There were easy semi-sheer cuffed trouser, sleeveless tees, drapey knits and flowy button-downs in odd print pairings like leopard and plaid or stripes and linoleum. And while the collection was styled in that whimsical Duckie Brown style, each piece had a character all their own. The pants proportions were right on target with a lot of the showing this season and is beginning to more and more look right, almost like a natural progression to the stiffened denims and slim khakis that invade the spring summer seasons as well. The slightly and not so slightly dropped crotches were handled in a modern un-eighties sort of way and looked fresh when paired with a tunic length oversized tee or woven shirt. You can see the entire collection in the finale below

I got a good sense of ease seeing this collection, kind of like that breath of fresh air that Dries brings to his collections. Another commendable collection built on separates that I can see in the urban man’s (my) closet. DW