Pop Singer, Fergie and her shoe brand, Fergie Shoes, are joining the fight against breast cancer with the Hope Shoe, an adorable pink pump from Fergie Footwear’s Fall 2010 collection which is available now.

The Hope Shoe, a 4-inch Dark Pink Soft Suede Pump,  will be available during the QVC presents “FFANY Shoes on Sale” event benefiting breast cancer research on October 15th. It will retail for $45 (half its original retail price) with 100% of the net proceeds going to breast cancer research.The Hope shoe ranges from size 5 1/2 to 11, so don’t worry ladies, there’s a size for you. As if you needed any more visuals, see below for Fergie rocking the Hope Shoe.

“FFANY Shoes on Sale” is an amazing event that has sold over a million pairs of shoes with net proceeds totaling $32.5 million donated to breast cancer research. Tune in to QVC on Friday, October 15th from 7PM to 10PM (ET) for the charitable shoe sale of more than 100,000 pairs of shoes sold at half of the manufacturer’s suggested retail price with net proceeds to benefit this vital cause.

There are several fragrances from diptyque that I love and use in various forms (eau de toilette, bath soaps, body washes, home fragrances, candles, etc) so when we got a preview of their newest fragrance, Eau Duelle, I knew I had another favorite to add to the list.

Eau Duelle, from the spicy family of diptyque’s fragrances, is duality – two becoming one. A mix of white vanilla and black frankincense, East and West ingredients. At first you instantly experience spicy notes of cardamom, saffron and elemi which then continues to vetiver, firnat vanilla, etc (see below for the rest of the notes)

This tea-time event took us on a mini journey through the creation of the fragrance, letting you sample the raw materials and speak with the perfume creator, Fabrice Pelligrin (my french has deteriorated as the years have passed so we were very lucky to have a translator)

I love the fact that this vanilla-based eau de toilette isn’t the sugary vanilla scents that are typical of personal fragrances (I’ve had a particularly unfortunate incident with bees because of one of those fragrances). To say that diptyque’s Eau Duelle is the grown up version of those fragrances is not doing it justice. It is significantly more, a sophisticated fragrance – sweet enough for those who love sweet fragrances but not too sweet to deter anyone else. Eau Duelle is available now in two sizes – 1.7 oz retails for $88.00 and 3.4oz retails for $120

It’s been too hot to wear clothes and it’s been annoying to do so until now. While I am not a fan of being caught in the rain, I do appreciate the break in the weather and the cool down. This cool down makes it so much easier to actually look at fall clothing. So on this cool rainy day, I could actually look at this adorable Explore Your Soul Tunic from Columbia Sportswear that’s been hanging in my closet since the summer

Not only is it comfortable, it’s freaking WATERPROOF – of yes I tested it out and it was amazing to see the water droplets sit on top of the fabric (thanks to the Omni-Shield advanced repellency). Not only does it keep you dry, it has “advanced evaporation technology and 4-way comfort stretch to keep you cool”. I also love the fact that it has double pockets which hit at the perfect arm length. I couldn’t help but take a photo of my sleeve 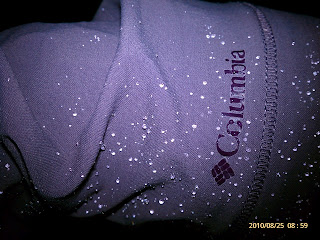 The Explore Your Soul Tunic comes in three colors – Tidewater (blue), Crushed Berry (shown above) and Greenscape (dark olive) and retails for $60.00. It is available in sizes XS – XL.

This temporary cooler weather has of course put me in a fall mood, so I will definitely try to fit in my other Columbia Sportswear items, like the Towering Tour Tunic, which easily transforms from long sleeve to 3/4 when you roll them up and snap into place with handy arm loops and closures. While on, this tunic kinda gives you a whole I’m off to safari feel which when you’re in the jungles of NYC is needed.

The last item, which i’ll most like save for a particularly cool day (unless mother nature really throws us for a loop and we’re at 50 degrees tomorrow) is the Heathered Honey Long Hoodie

which retails for $60.00 and is available in Grill (grey), Mud (brown), Deep Teal and Black. My favorite thing about this hoodie besides its comfort are the princess lines on the front which makes wearing a hoodie very feminime. Ok, make that two favorite things because I love the fact that it has a shirt collar which is separate from the hoodie; the weight of hoods always make them slip back and your neck ends up getting cold. This tunic ends that issue. The Heathered Honey Tunic is available in sizes XS – XL and the Mud and Deep Teal are available in sizes 1X-3X

Columbia Sportswear will definitely have you ready for the unpredictable fall weather….now all I need are a pair if cute comfortable rain boots and i’ll be set.

Def Jam and Phat Farm Clothing Creator, Russell Simmons, in collaboration with giant retailer, Macy’s introduced the Fall 2010 Menswear Collection of his newest clothing venture, ARGYLECULTURE. If you’ve ever seen Russell Simmons or just a photo of him, then he was most likely wearing an Argyle Sweater.
The ARGYLECULTURE Collection is currently only for men but hopefully a women’s collection will launch in the near future. The brand, “aimed at the man over the age of 25 who has graduated from urban wear to a more mature look, mixes maturity, success and stability with hints of soul, pride and individuality”. The ARGYLECULTURE man has traded in his bubble jacket for a blazer, his backpack for a soft leather briefcase or duffle and his baggie jeans for chinos

Thanks to my lovely cohort, Beauty by Benz for the above three images. See below for video of the presentation’s finale

The event and all guests was being filmed for Russell’s reality show which will premiere on Oxygen called The Russell Simmons Project. It will focus on the women in his life – mainly his female assistants that manage his business and his life.

Many celebrities were in attendance to help Russell celebrate his newest collection. Surprising, Russell was not wearing his signature Argyle Sweater/Vest to this launch – maybe he thought it’d be expected

Celebrity guests including Kwame Jackson from the first season of The Apprentice, who has a Menswear Accessories line at Macy’s Called Krimson by Kwame

Uber Fab Designer (whose clothing I hope to be able to afford one day), Nicole Miller

the hilarious Anthony Anderson, who for some reason looks much younger than usual (share your secrets please sir)

and Jaslene Gonzalez, who shocked me when she said her fab shimmy dress was Forever21 and her shoes by Steve Madden – she looks amazing

Sadly, I left before Courtney Love arrived (I tried to wait but exhaustion got the better of me). i later found out she arrived after 10pm. In a time where our eyes are still scorched with visions of young men with their sagging pants around their knees – it is a blessing to see a more mature urban man. Note to the saggy pants wearers, if General Larry Platt’s “Pants on the Ground” didn’t sway you then listen to what the master of urban wear is telling you.

Check out a few more photos from the event

I had the pleasure of attending Haute House PR’s Fall 2010 Preview of their clients. Haute House PR is a new PR agency catering to L.A.’s fashion industry headed up by Jordan Landes-Brenman and Kelly LaRussa. I was very excited because I was already familiar with their celeb favorite, Leyendecker (Rihanna and Kourtney Kardashian are fans) but I also got more acquainted with other lines like t-shirt line, Simdog (Former Spice Girl Mel B and Twilight’s Ashley Greene are big fans), sweet and feminine womenswear Boaime, gorgeous handbag line Vieta, denim line Mike Lanes Premium Denim (which I hope to get acquainted with soon), to die-for jewelry & handbags from Clara Kasavina, and skincare companies, Reactivator and Mona Nacci.

Jordan walked me through a few of these LA Based lines and I immediately fell in love with Vieta’s Handbags and Clara Kasavina’s Jewelry and vintage inspired Handbags. They were just so beautiful. I couldn’t help making mental checks of my wardrobe. Take a look at these lines below:

Such a wonder night of amazing #wines and great #f

Is it too soon to think about #summer? These @heid

Fell in love with these @ateliercologne #fragrance

Who are you sharing your hearts with this #galenti

@10freenailcolor keeps you in the #pink at the @pr

Who's ready for some post ski activities? The very

The loss of childhood innocence and beliefs.....an

You too can celebrate the @artechouse @pantone int

I was introduced to @taliselements the day before

A few of our favorite looks from the @lametamorpho

Could your #zodiacsigns determine the perfect for