If you found yourself drooling over our previous coverage of Village Voice Choice Eats post and thought, I wish I was there, you will soon have your chance to indulge, just like we did. The must-attend foodie event is back for another year of culinary delights to sate every palette. With 18 restaurants already signed up (the event will feature over 50 handpicked restaurants from all five boroughs that have been reviewed and heralded in the famed newspaper), the Village Voice will hold its 8th Annual Choice Eats tasting event on Friday, March 13th, from 6:00 pm – 10:00 pm at the Metropolitan Pavilion.The Village Voice has also released the first round of 18 participants including 2 Duck Goose, 606 R&D, Awadh, Bobwhite Lunch & Supper Counter, Butter & Scotch, Commerce Restaurant, The East Pole, Fletcher’s Brooklyn Barbecue, Huertas, John Brown Smokehouse, Littleneck, Luke’s Lobster, MAX , No. 7, The NoMad , Spicy Pot, Thai Rock, Tuome and many more to be announced. All Choice Eats guests will be able to enjoy unlimited sampling of the best dishes from the 50+ restaurants, along with desserts, complimentary craft beer pairings, wine and liquor beverages. 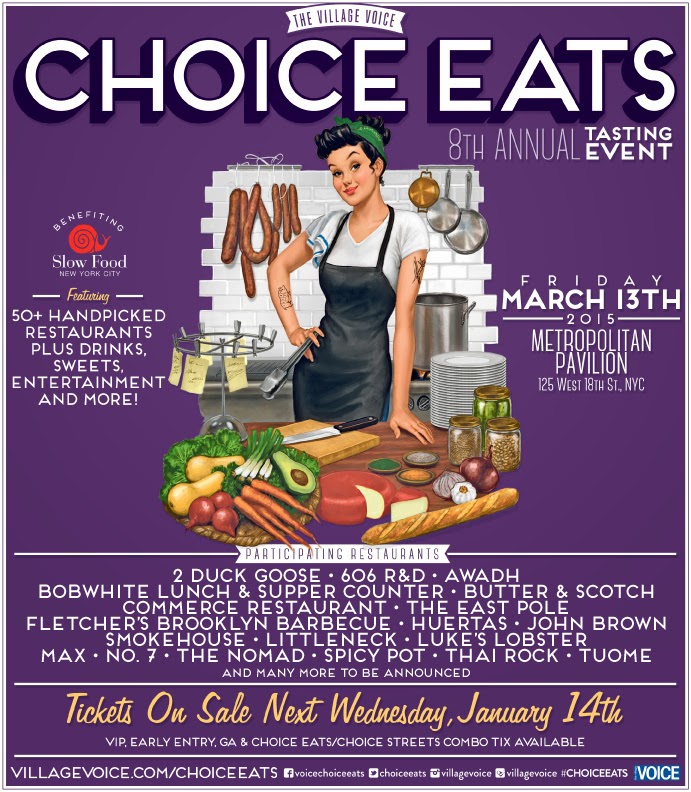 This year’s Choice Eats will feature three tiers of ticket options – General Admission tickets ($65.00), Early Entry Preview tickets ($85.00) and VIP tickets ($99.00) – all of which will be available for pre-sale now through Tuesday, January 13th using the exclusive press release pre-sale code: EATSPR. Tickets will go on sale to the general public on Wednesday, January 14th at 12:00 pm. The Early Entry Preview ticket will allow guests to get a half hour head start on tasting and sipping, along with the ability to skip the line and beat the crowd. The VIP ticket grants guests admission to the full event one hour early, with access to a private VIP room, and an exclusive VIP gift bag. For more details on this year’s three ticket options, visit: www.villagevoice.com/choiceeats.

The Voice will also offer ticket buyers access to a limited number of Choice Eats/Choice Streets combo tickets for an additional 10% off savings. Both VIP combo tickets ($170.00) and GA combo tickets ($115.00) are available until supplies last and will offer guests tickets to Choice Eats as well as the 4th annual Choice Streets Food Truck event at The Intrepid on May 5th with a sampling of 20+ of NYC’s more popular food trucks.

This year marks the 7th year working with the non-profit organization Slow Food NYC as the charitable partner of Choice Eats, whom a portion of proceeds will be shared with. Slow Food NYC is the New York City chapter of Slow Food, a non-profit, member-supported organization founded in 1989 to counteract the culture of fast food. Slow Food stands against the disappearance of local food traditions and people’s dwindling interest in the food they eat, where it comes from, how it tastes and how our food choices affect the rest of the world.

Hey you fellow beauty addicts, do you need to know and have the next big thing in makeup? Is Sephora your second home? Do you have dreams of becoming a Makeup Artist? Well do I have an event for you – Join fellow beauty addicts at The Makeup Show, the largest PRO-ONLY driven beauty event in NYC, as top industry artists and pro-driven companies present the newest products, seminars, forums and hands-on workshops. 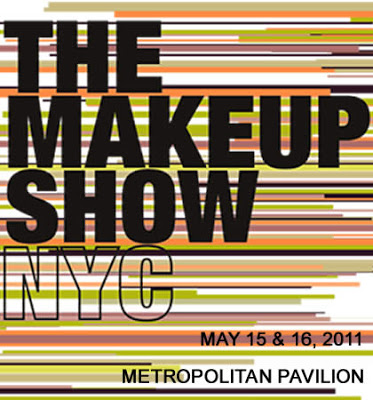 The Makeup Show runs Sunday, May 15th from 9am -6pm and Monday, May 16th from 9am – 5pm and is held at The Metropolitan Pavilion, 125 West 18th Street. One lucky person will receive a ticket to attend one day of the show – you select which day works best for you.

To enter this must have giveaway:
Leave a comment on this post stating why do you want to attend The Makeup Show


Extra Bonus if you:


NO PURCHASE NECESSARY. Void where prohibited. Must be legal U.S. resident, 18 yrs or older to enter. Sweepstakes to commence on April 29th, 2011 at 8:00:00 p.m. Eastern Time (“ET”) and end on May 6th, 2011 at 11:59:59 p.m. ET. My Life on and off the Guest List will determine (1) one winner to attend the show on either May 15th or May 16th. Limit one prize per household. Odds of winning are dependent on the total number of eligible entries. Approx estimated retail value of prize $45.00. Winner will be notified by email. Offer valid while supplies last. Giveaway sponsored by My Life on and off the Guest List; Prize provided by The Makeup Show.

Attention all you fellow Rock & Republic fans. Have a low budget but expensive tastes? Now you can get both without the guilt. The Warehouse Sale is holding a Rock & Republic Sample Sale. The “Nation’s largest traveling Warehouse Sale” is bringing you Rock & Republic clothing at up to 80% off  – denim, tops, dresses, outerwear and more for men, women, kids and even maternity lines.

This amazing event takes place from November 4th – 6th at the following location: 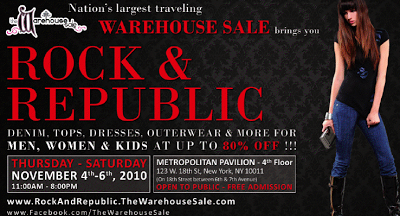 In honor of this fabulous sale, ONE LUCKY WINNER will win a $50 gift card good towards all purchases during the Rock & Republic Warehouse Sale.

To enter this must have giveaway:

Leave a comment on this post stating what you’d love to purchase at the Rock & Republic Warehouse Sale.

Extra Bonus if you:

**Winner will be chosen at random.

**Winner will be notified by e-mail no later than Thursday, November 4 at 2:00 pm EST.

**Gift card is non-tranferable and will be redeemable at check out and reserved under winner’s first and last name.

Please take notice that Rock & Republic is not associated with the Warehouse Sale or its affiliates, employees and agents.