Most people are not familiar with the history of chocolate or what it’s made from. We are one of the lucky few who are privy to this information because we were lucky enough to grow up on a beautiful island that boasts a cocoa plantation, St. Lucia. Today, years after we left this beautiful island (which has topped many must-travel lists), we come full circle to the Hotel Chocolat to help welcome their skincare brand, Rabot 1745, to the US. 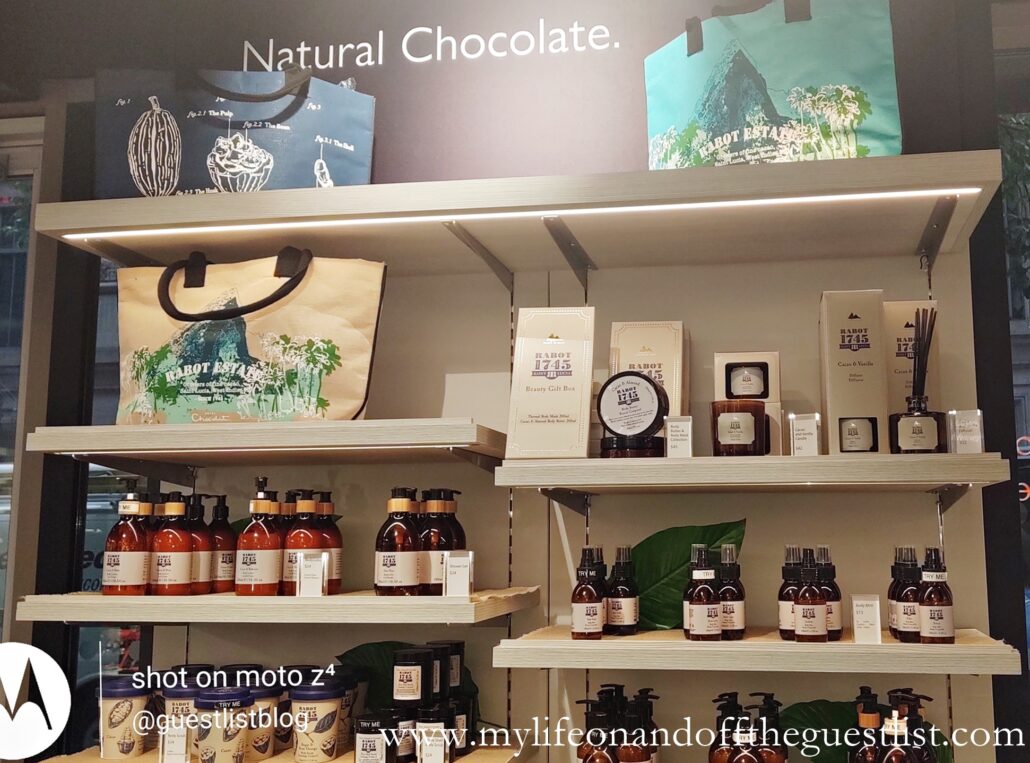 Inspired by the wild beauty of St. Lucia, Rabot 1745 is a natural and sustainable bath & body range that is luxurious yet affordable. Born on the Rabot Estate in St. Lucia, a cocoa plantation owned by British chocolatier and sustainable cocoa grower Hotel Chocolat, Rabot 1745 Beauty uses sensorial ingredients sourced from the sustainable cocoa farming harvested on the estate. These skincare products make a great attempt at capturing the essence of the estate in a bottle. There’s so much to love from this great skincare brand. First, you’ll love the ingredients, which consist of avocado, wild honey, raw cacao, rosemary, shea, and cocoa butter, and mango; and the following oils: jojoba oil, mango seed oil, apricot kernel oil, sweet almond oil, and avocado oil. 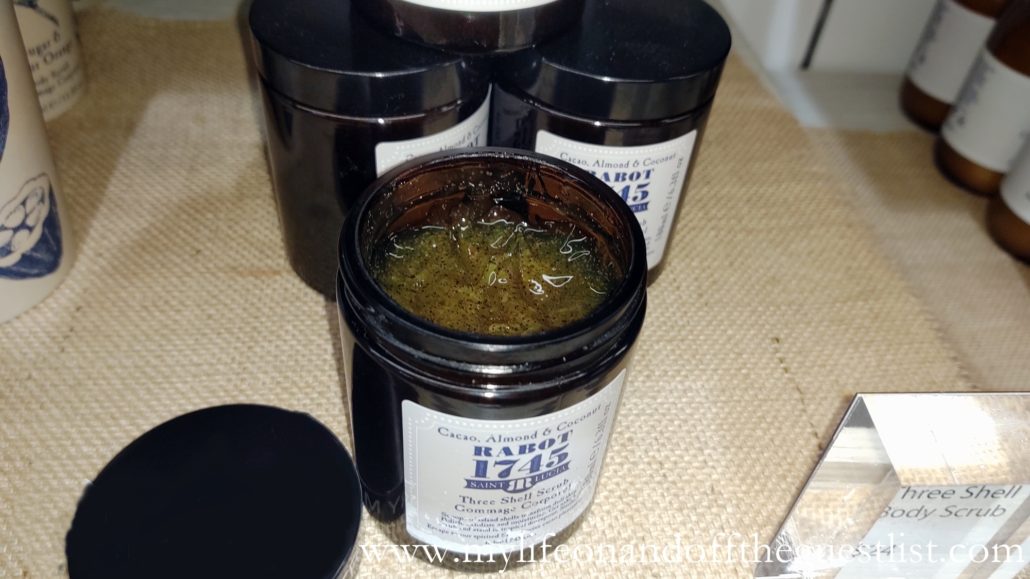 Rabot 1745’s gentle yet effective natural body scrubs are exactly what you need to exfoliate and polish your skin, revealing fresh and smooth skin. Choose their Coffee Body Scrub to revive your tired skin; the Sugar & Sour Orange Body Scrub to hydrate and leave your skin super smooth; the Salt & Lemongrass Body Scrub for a natural citrus exfoliation; and the Cacao, Almond & Coconut Three Shell Body Scrub to polish, exfoliate and moisturize your skin.

We plan on using this moisturizing lip balm all winter long; we can’t wait to boast about how super soft our lips are. Your lips will appreciate being soothed, smooth and replenished thanks to these five balms and scrub. The Avocado & Lime Smile Reviver is a light exfoliating lip polish, while the Almond Chocolat, Wonder Balm, Coconut Chocolat, and Honey Chocolat lip balms keep your lips kissably soft. 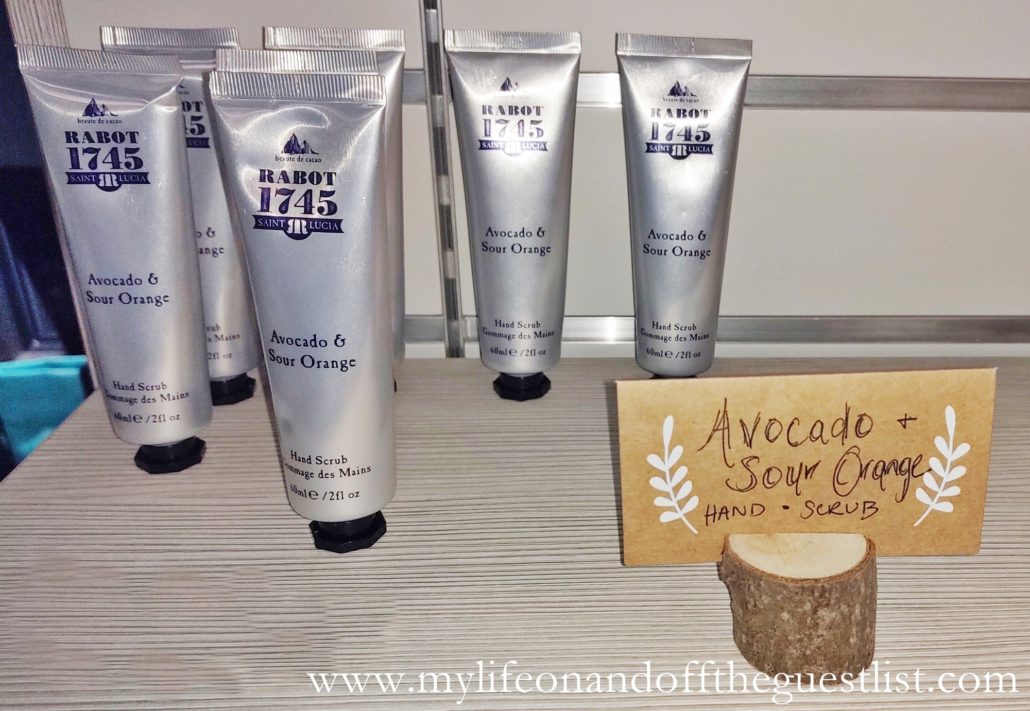 Sometimes it’s not your body or lips that need a good exfoliation, your hands need love too. The Rabot 1745 Avocado & Sour Orange Hand Scrub is here to give that love thanks to its nourishing avocado and refreshing sour orange ingredients. The above are just some of the wonderful products available from Hotel Chocolat’s Rabot 1745. Check out photos of some of the other products below. 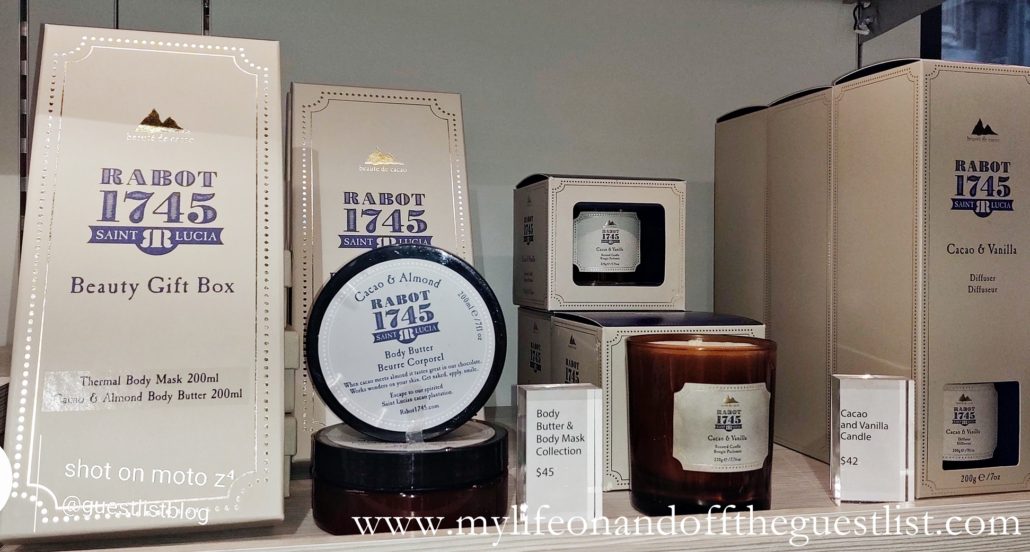 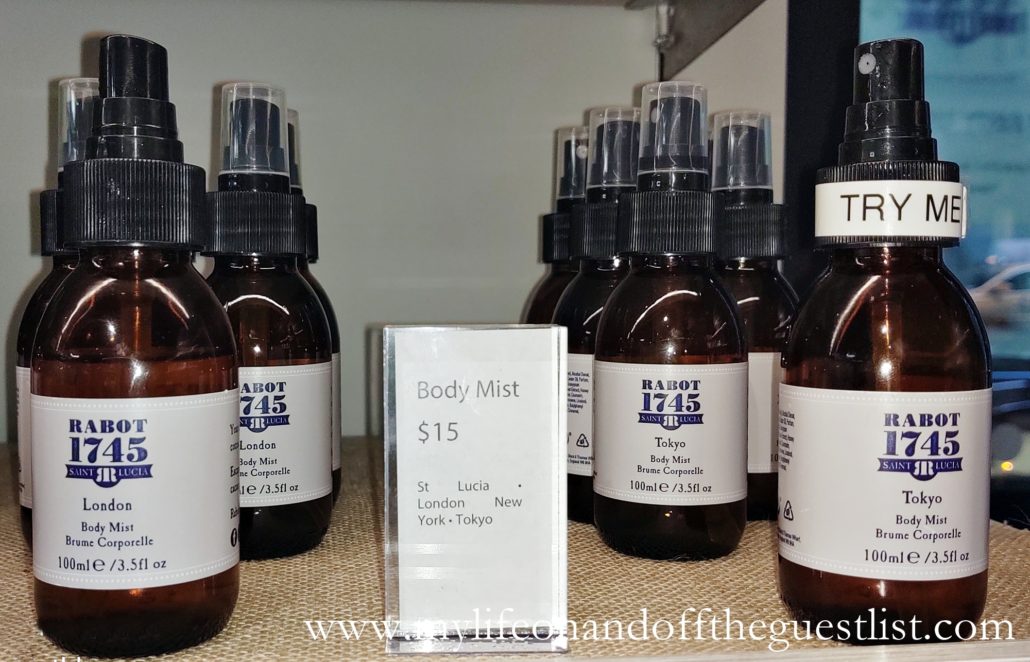 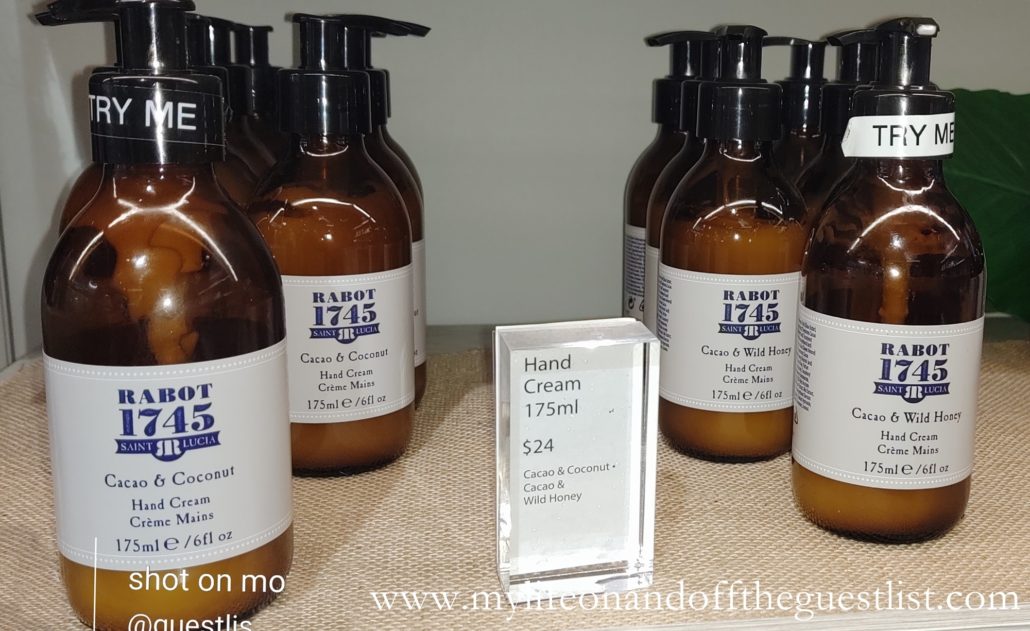 The complete range of products includes shower gels & scrubs, hand washes, natural body butters, lotions, and creams, bath and body oils, body masks, fragrances, and body mists, candles, and diffusers. We haven’t tried these products yet but we hope to soon when the official US launch happens.

Have you ever been introduced to something that truly speaks to you? Something that can remind you of your favorite place, thing or person. That is what we felt when we attended a preview event for jewelry designer, Anitanja Lawaetz’s US collection launch. The Anitanja Jewelry Collection was inspired by the gorgeous island of St. Lucia, a place we hold very near and dear to our hearts. Her jewelry line features six collections, inspired by various aspects of St. Lucia, from the iconic Pitons, to the cocoa pods. Get ready to fall in love with the Seed Collection, Sea Fan Collection, Piton Collection, Medallion Collection (available in gold and silver), Drift Cone Collection, and Cocoa Collection. 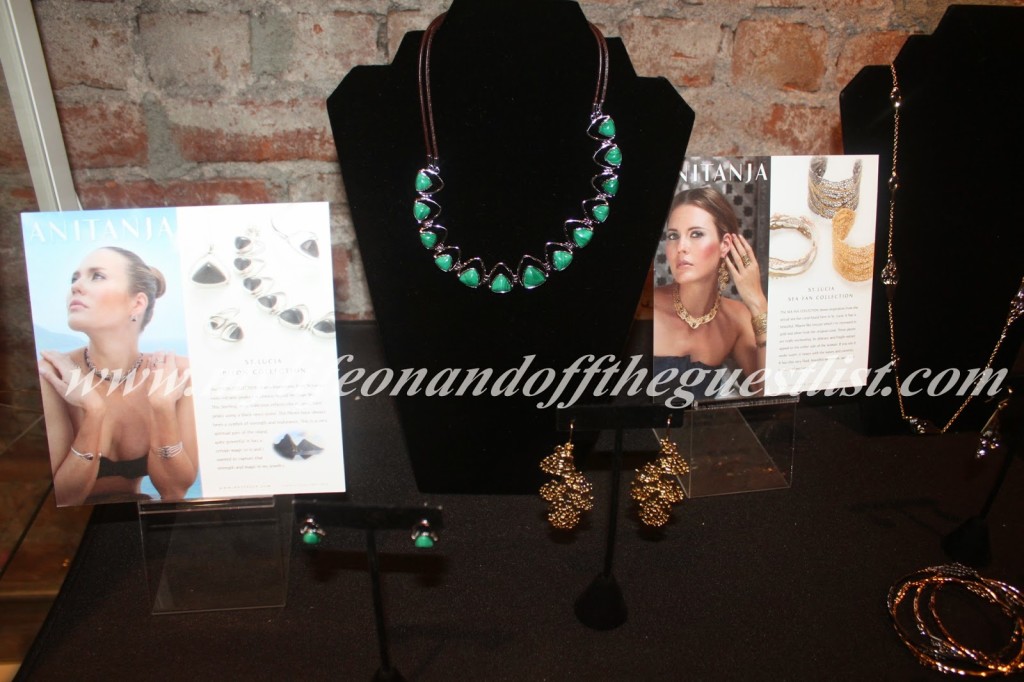 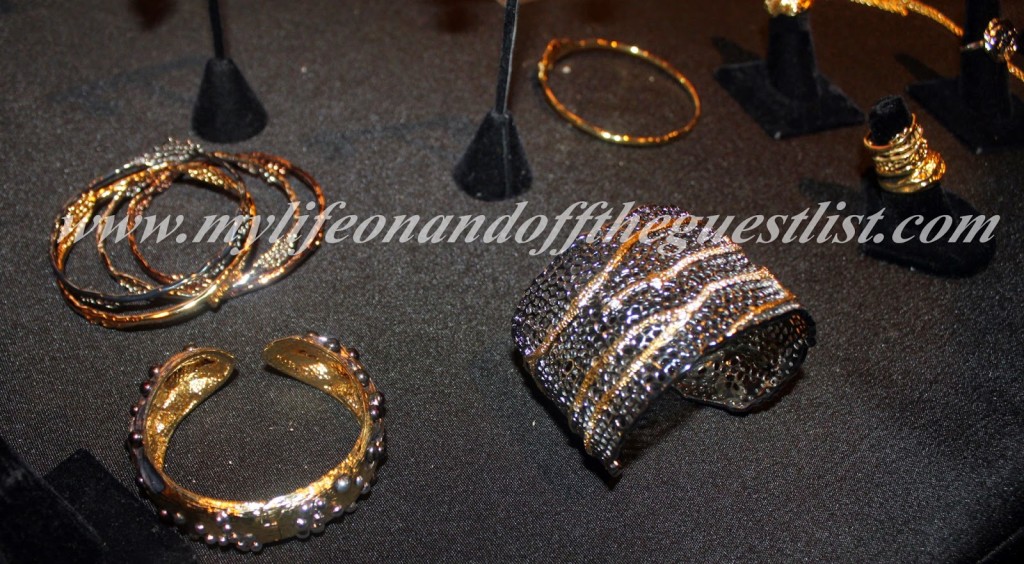 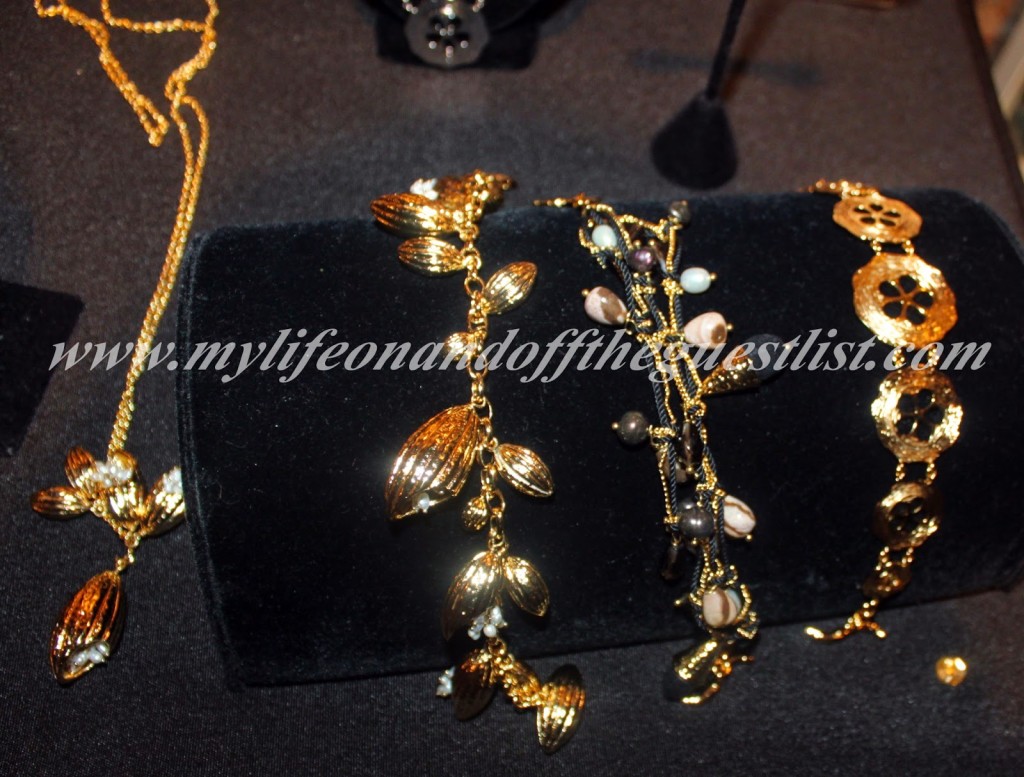 Want to learn more about each collection, and the inspiration behind it? Keep reading on to find out more information below and see our interview with Anitanja Lawaetz:

Sea Fan Collection – Anitanja perfectly captures the beauty and delicate, openwork design look of sea fan corals found in the Caribbean Sea. The filigree-esque texture is highlighted in gold, black and silver tones with CZ accents, white, or white pearls. Ee are particularly in love with this collection’s CZ Cuff Bracelet and the Gemstone Collar Necklace. 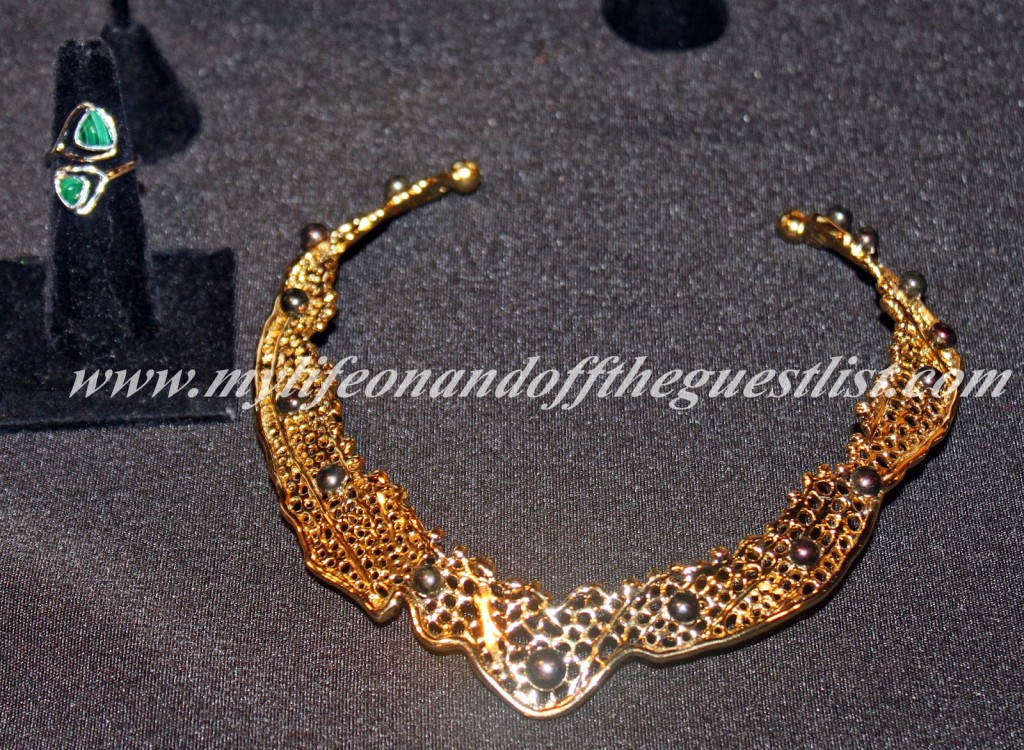 Piton Collection – capturing the iconic “twin” Pitons, St. Lucia’s volcanic peaks and the most recognizable landmark on the island, this collection celebrates the Pitons with its pyramid-shaped stones, a symbol that is also featured on St. Lucia’s flag. Onyx and green malachite give pieces in this collection the design element to capture the majesty and beauty of these iconic peaks. We love how the Piton Mountain 2-Stone Malachite Ring captures the lush green color and size difference.

Medallion Collection – also inspired by Sea Fan Coral but with more geometric details and a structured design, pieces from the Medallion collection boasts a more versatile appearance that keeps your look contemporary while still remaining quite polished. This collection is available in both silver and gold and is more high-end, so therefore is at a higher price point. Our favorite piece is the stunning statement Bibb Necklace.

Drift Cone Collection – just as rocks gets their smooth texture in the rivers, drift wood gets distinctive shapes and textures from the waves of the sea. Drift cones are ample on the shores of St. Lucia and this collection captures the characteristics of an these unidentified seed cones. Black cultured freshwater pearls and ridged texture and groove patterns add luxury and edginess to these pieces. We love the 2-Tone Gemstone Cuff Bracelet, the Bronze Bangle Bracelet, and the 2-Tone Gemstone Drop Earrings.

Cocoa Collection – no we’re not talking chocolate diamonds; this collection celebrates both aspects of the cacao pod, the whole pod itself and the floral-esque shape that is seen when the pod is cut vertically…..these segmented pieces are the cross-sections. One look at the stunning Cocoa Pod Gemstone Drop Earrings or Gemstone Drop 8″ Bracelet and you’ll be in love. 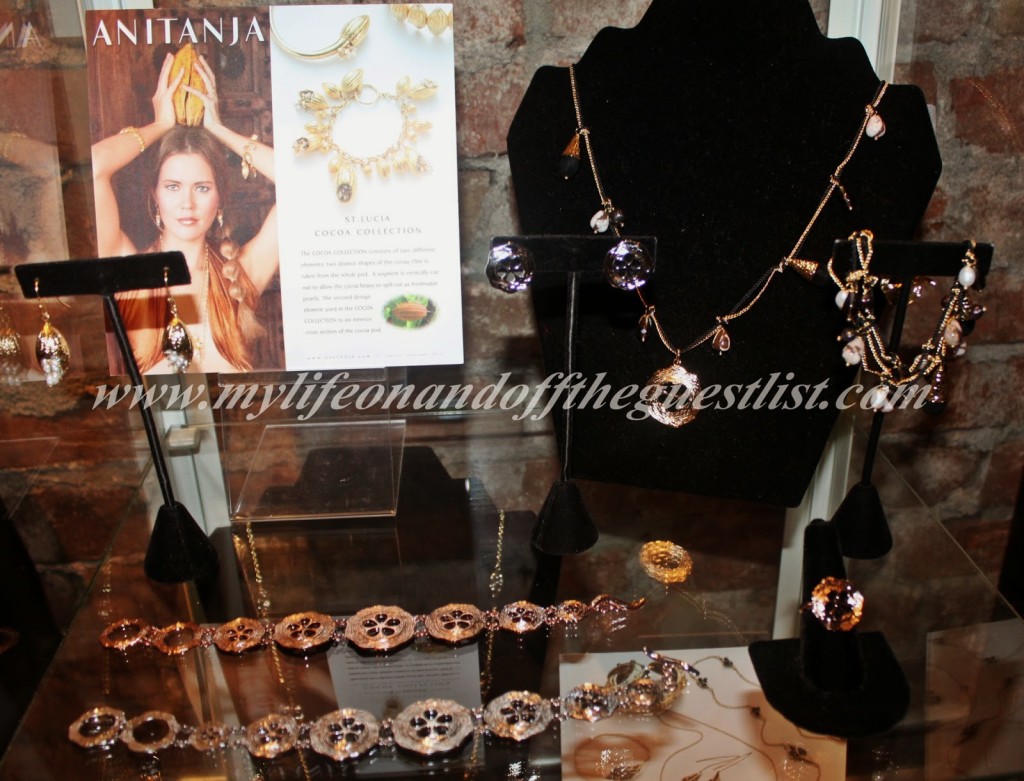 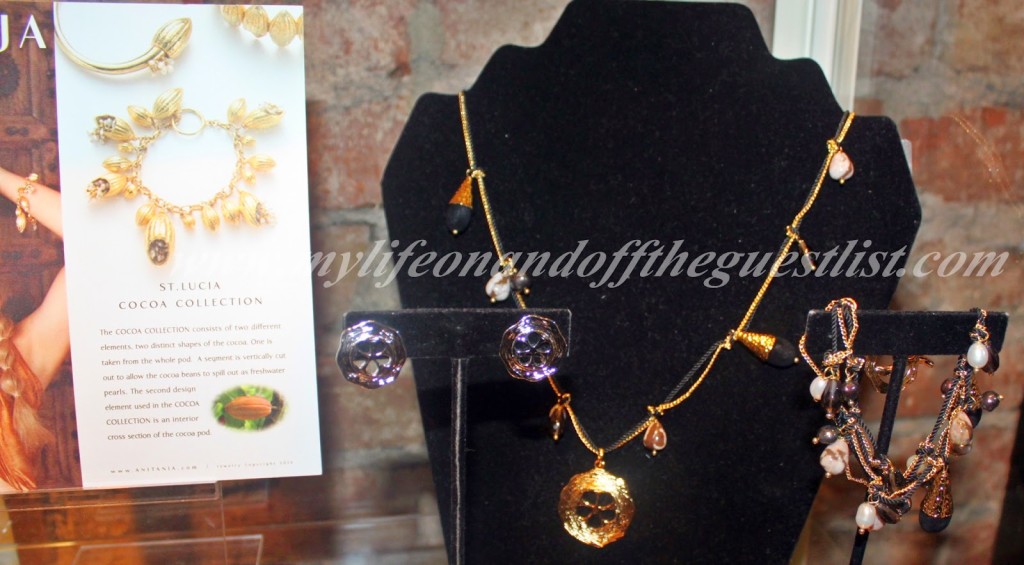 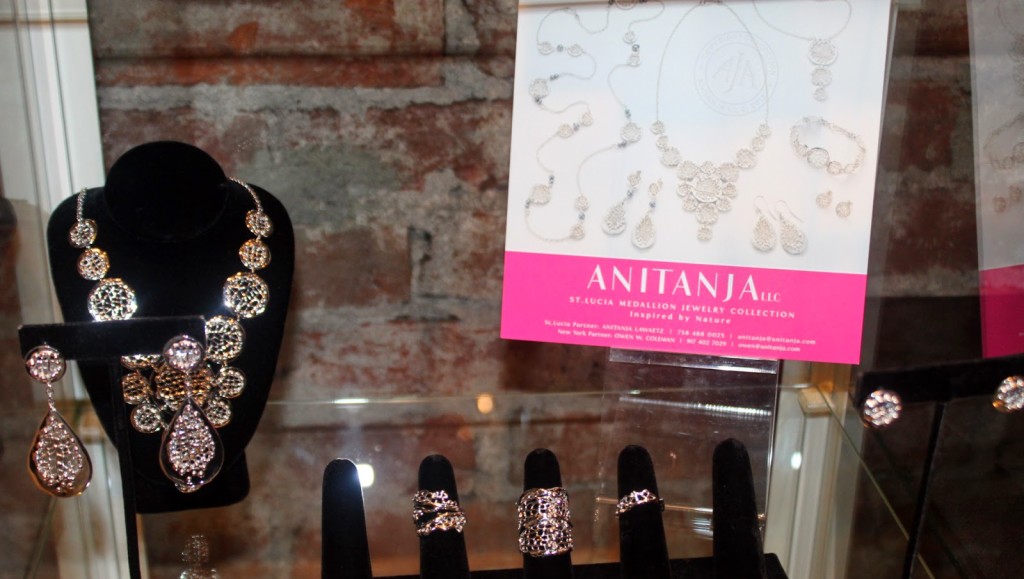 We had the pleasure of talking to Anitanja about her stunning current collection, life on the beautiful island of St. Lucia, and the inspiration for her upcoming collections. Enjoy our interview below:

Pieces from the Anitanja Jewelry Collection can be purchased directly from her website,  www.anitanja.com, as well as on HSN.com.

With soca music playing in the background, free-flowing Vita Coco Coconut water and models holding Birds of Paradise, designer Whitney Pozgay whisked attendees to the enchanting island of St. Lucia, her recent honeymoon location. Whitney, who was born and raised in Phoenix, Arizona reconnected with nature on her honeymoon, something which was quite evident in her beautiful use of vibrant flora and fauna prints 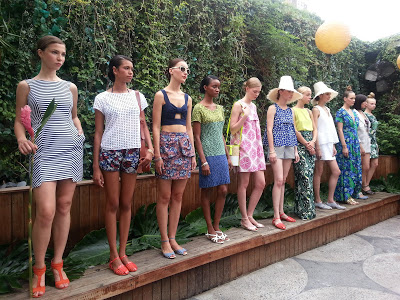 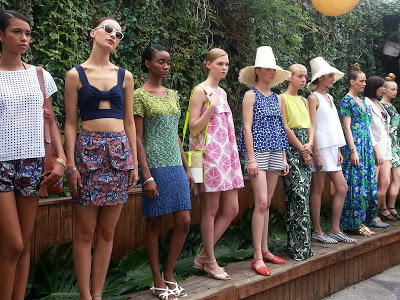 I found myself gravitate to her bold prints, in particular, the Banana Tree Leaf print designed by friend and artist Jemme Aldridge. A tropical which were shown in two sizes in the clothing and the Osborn & WHIT footwear collaboration 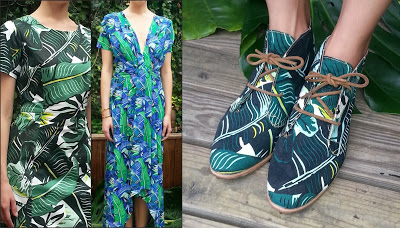 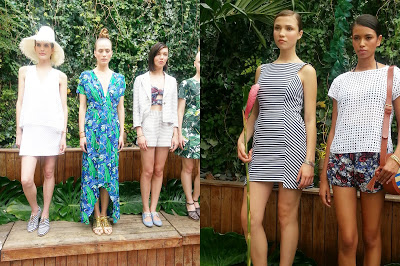 Check out designer, Whitney Pozgay in her button-down tunic featuring the smaller Banana leaf print below 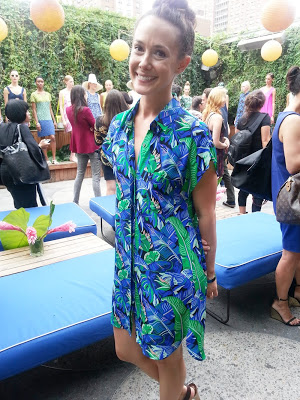 Grammy-award winning multi-Platinum artist John Legend will headline this year’s Saint Lucia Jazz Festival as it celebrates its 20th anniversary of entertaining locals and people from around the world. What better way to enjoy the romantic songs of John Legend than surrounded by clear blue waters, a gorgeous sky, breathtaking views and gorgeous weather. 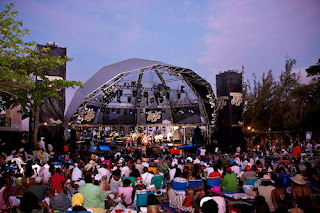 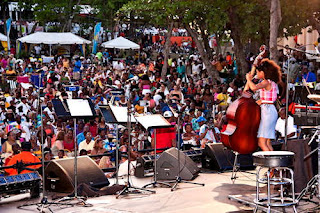 From April 30 to May 8, 2011, the Saint Lucia Jazz Festival will be comprised of an international roster of renowned musicians from various genres including jazz, R&B, pop, soul and world music who herald from the US, UK, France, Africa and Saint Lucia. The festival will feature multiple complementary daily shows of acoustic, new age, jazz, soul, reggae, and R&B sounds held in a variety of locations and venues around the island – Jazz on the Square in Castries and Jazz in the South at locations in Vieux Fort and Laborie.

Headliners will perform at the main stage performances which will be held at Pigeon Island National Park and Gaiety in Rodney Bay, the island’s epicenter of musical entertainment, featuring local clubs, lounges and restaurants. Along with John Legend, this year’s musical acts include:

Trey Songz – The highly acclaimed R&B singer-songwriter Trey Songz debuted his first recording album in 2005 with I Gotta Make It followed by Trey Day (2007). His third album, Ready, was released in 2009 while his fourth studio album, Passion, Pain & Pleasure, was released in September 2010, all garnering him multiple BET and Grammy award nominations, including winning the 2010 BET Award for Best Male R&B Artist.

Regina Carter – American jazz violinist, Regina Carter, lauded as one of the finest violinists of her generation, will share African folk tunes from her newest album, Reverse Thread.

Bad Ass Brass  – Formed in 2008, the band takes its influence from the sounds of traditional New Orleans brass bands but adds its own unique twist. The group won the opportunity to play at this year’s jazz festival through a Facebook contest in the UK hosted by the Saint Lucia Tourist Board.

Maceo Parker – American funk and jazz saxophonist, who had a long term association with the late, great James Brown, will get the audience dancing with hits from his latest album Roots &Grooves, which won a Jammie for best Jazz Album in 2009.

Saint Lucian Collective – An ensemble of Saint Lucian’s jazz icons who will perform a mélange of sweet pulsating Caribbean beats.

“As the leading and longest running jazz event in the Caribbean, year after year we welcome thousands of visitors from all corners of the globe to our legendary island to celebrate the premier voices in the music industry,” said Saint Lucia Tourist Board Director of Tourism Louis Lewis. “We’re thrilled to be marking our 20th anniversary with another sensational lineup. Combined with our world-class resorts, unique activities, exotic cuisine, unspoiled nature and warm people, this is still the best party in the Caribbean.”

See below for performance schedule (click on image below to enlarge). For a full concert schedule, festival tickets and updates, visit the official Saint Lucia Jazz website, www.stluciajazz.org for more detailed festivities for the Main Stage, Jazz on the Grill, Jazz on the Pier, Jazz in the South, Jazz Rhythms at Rodney Bay Mall, and Tea Time Jazz.

Several resorts on the island will be celebrating the jazz festival with great deals and special packages. See below for the vast choices:

For more information about the island of Saint Lucia; its product offerings and resort vacation packages, visit www.saintlucianow.com.

One of the Windward Islands of the West Indies’ Lesser Antilles, Saint Lucia (pronounced Saint LOO-sha) is nestled halfway down the eastern Caribbean archipelago. The “Helen of the West Indies,” Saint Lucia is known for its natural beauty and diverse attractions, including the signature Piton Mountains – a UNESCO World Heritage Site – a tropical rainforest and one of the world’s few drive-in volcanoes. Culturally rich offerings include the bustling marketplace in the capital of Castries, quaint fishing villages along the coastline, and the annual Saint Lucia Jazz festival. Saint Lucia’s wide range of accommodations includes world-class five-star resorts, all-inclusive resorts, intimate inns and value-oriented properties.