We’ve been so busy transitioning our wardrobe from summer to fall, we forgot about another important seasonal switch that has to be made, the transition of our cocktails from summer flavors to fall flavors. We had the pleasure of attending a Pinnacle Vodka event celebrating fall cocktails, and the launch of their new original vodka bottle design (pictured on the left), hosted by charming Charleston Blogger, Chassity Evans. 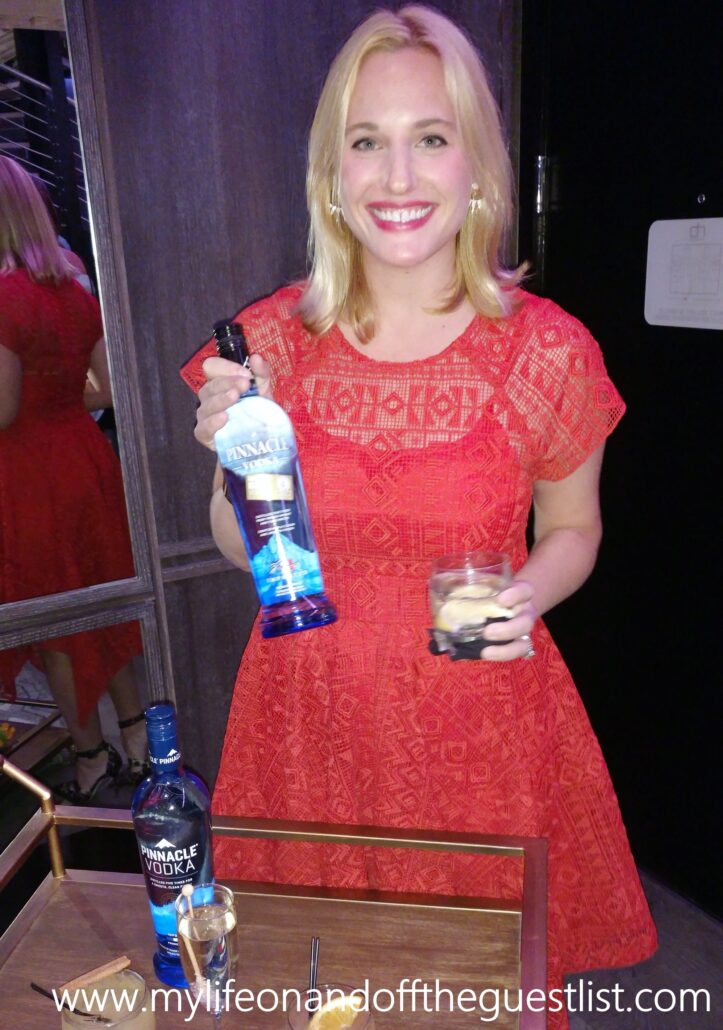 Great, fall-ready accessories are a must for great style, and the best fall accessory is a delicious cocktail made with Pinnacle Vodka. Chassity likes to change things up a bit by incorporating seasonal flavors like in the Cranberry Punch cocktail (the recipe and the two others we enjoyed at the event are featured below). A favorite at the event, this spiced up version of a popular summertime punch includes the award-winning, five-times distilled and made with imported French vodka and a hint of vanilla, Pinnacle Original Vodka.

In order of appearance in the photo above, the must-try Pinnacle Vodka fall cocktails are as follows:

2 parts Pinnacle® Original Vodka
6 parts apple cider
Cinnamon for garnish
Pour vodka into a glass, then fill the rest of the glass with apple cider. Garnish with cinnamon stick. 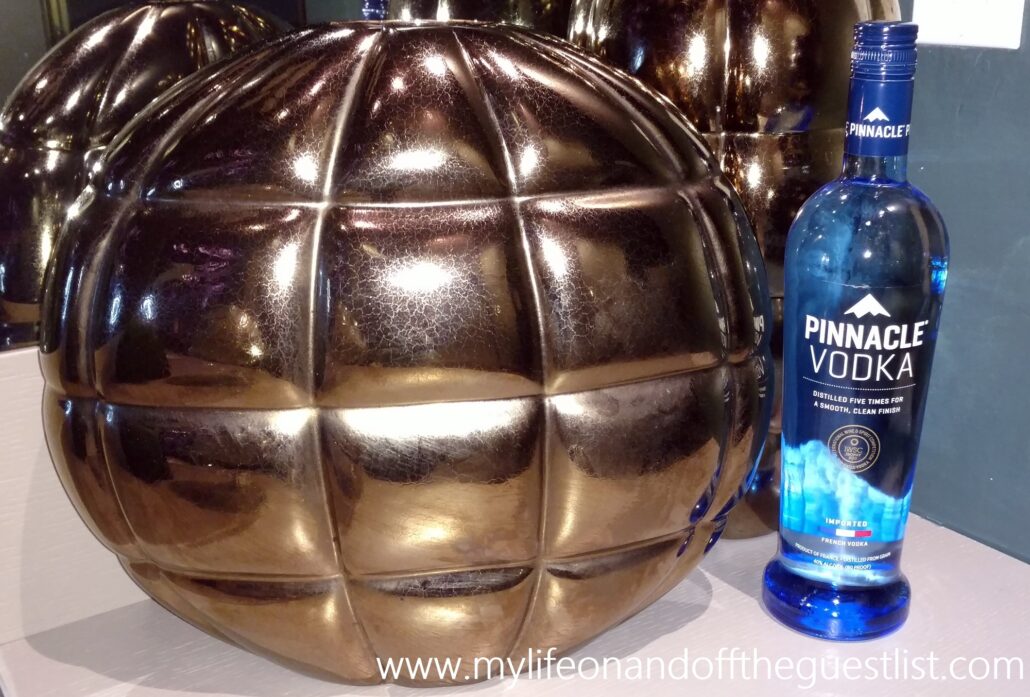 The new Pinnacle Original Vodka bottle design features a more polished and refined look. This new bottle encapsulates the clean and smooth profile of Pinnacle Original Vodka. Along with enjoying an unlimited supply of the delicious Pinnacle Vodka fall cocktails, we drooled over the gorgeous accessories from Bauble Bar, and  also took note of some of Chassity’s wonderful tips and tricks for fall accessorizing. Check them out below: 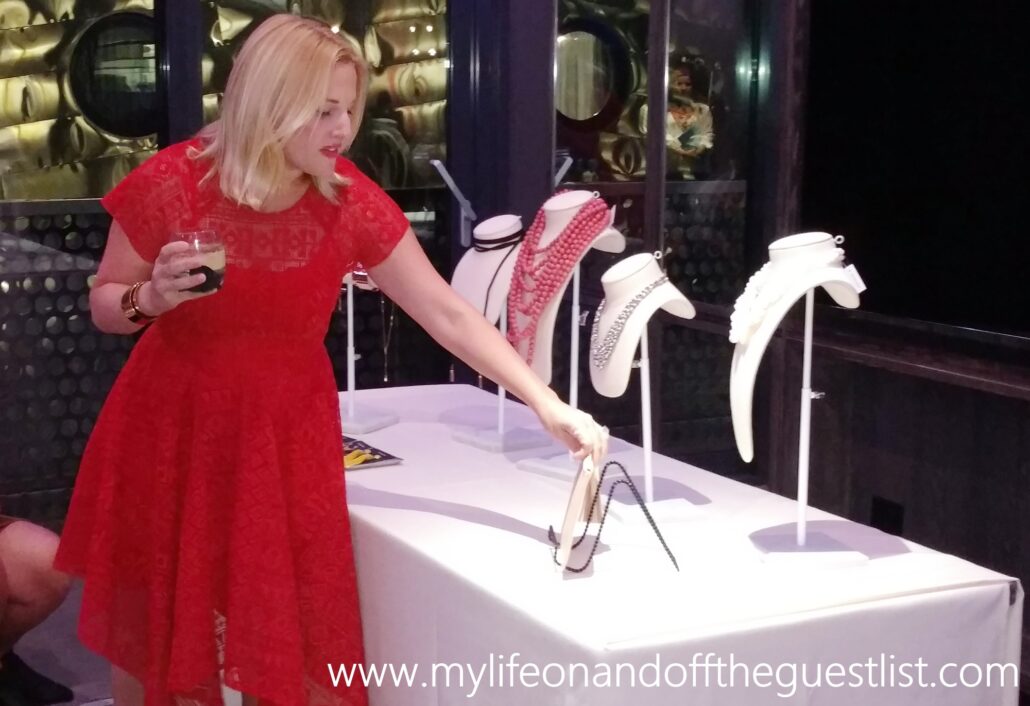 What do you think of the new bottle design? What tips are you incorporating in your summer to fall fashion transition?

Alas, it’s almost time to say goodbye to the summer season, and welcome autumn. During this seasonal change, we can’t help but think of harvesting and fun trips to local farms to pick fruits, like ripe juicy strawberries. For those who’ve never gone strawberry picking or prefer to do their picking at supermarkets, you should know there are techniques to picking the best strawberries. According to Sara Gore, entertaining expert, and co-host of New York Live, for its Life Skills of the Highly Entertained series, when it comes to strawberries,“bigger is not always better, after picking the perfect berries, you have to know how to store them, and adding a spirit, like vodka, to a drink like strawberry lemonade gives it a nice happy hour spin.” Which brings us to the NEW Pinnacle Strawberry Vodka, the latest flavor launch from the premium flavored vodka maker. Today we’re sharing two great cocktail recipes to enjoy using Pinnacle Strawberry Vodka and the wonderful tips from Sara Gore. 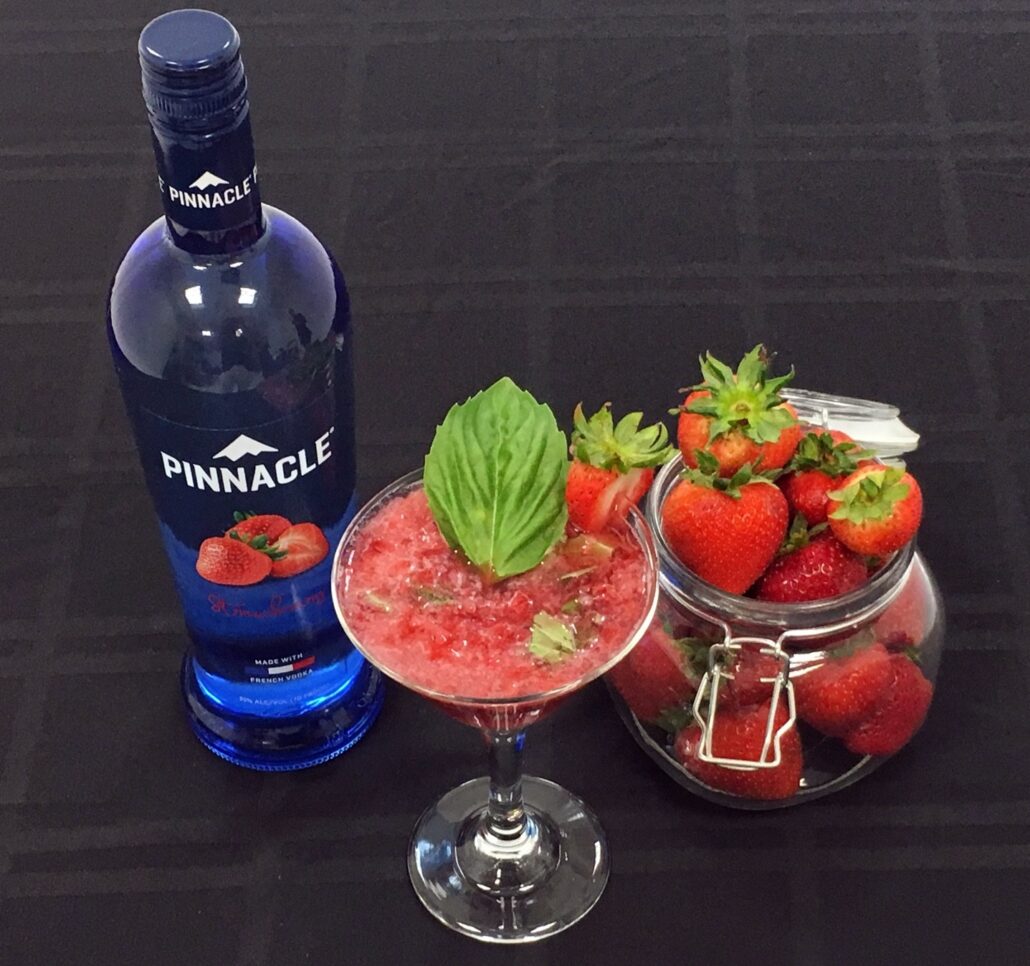 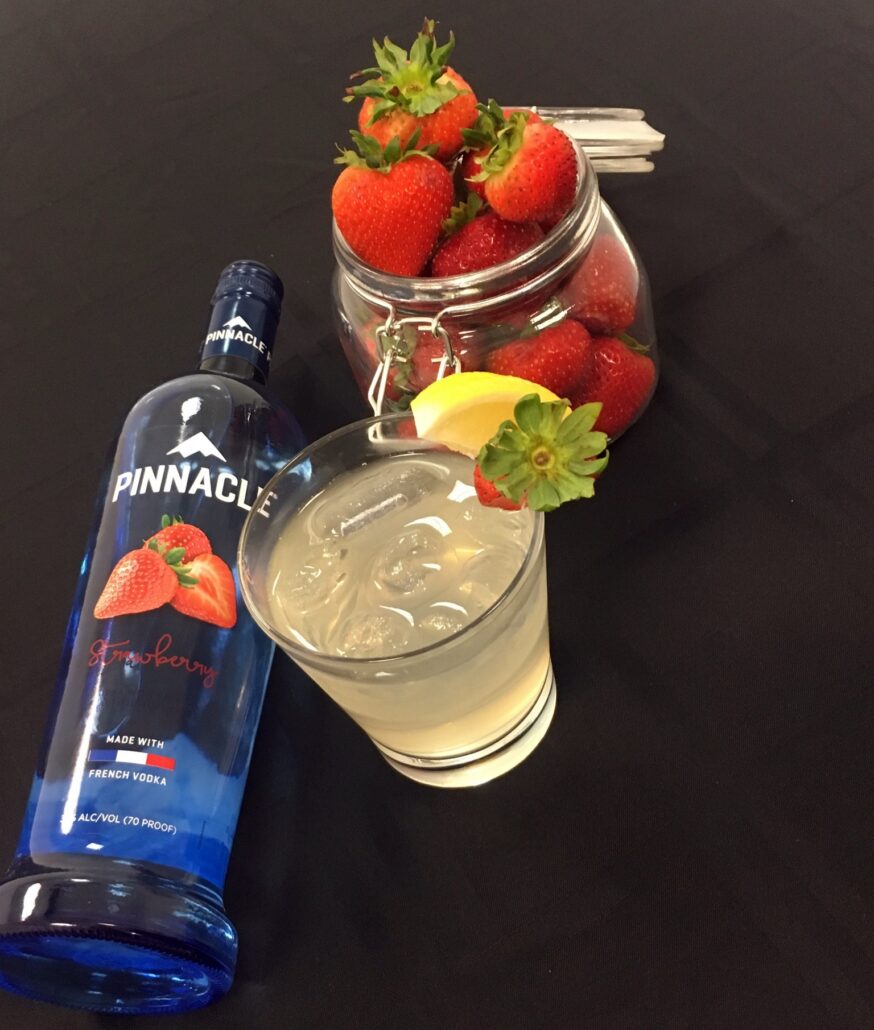 What are your thoughts on these Pinnacle Strawberry Vodka cocktails? Are you guys excited for this new flavor? As promised, enjoy the full range of tips from Sara Gore on making the most of your strawberry enjoyment:

Pinnacle Strawberry Vodka hits store shelves this month, so keep an eye out for the newest addition to the french distilled lineup.

We are days away from celebrating the 240 years that the United States of America has no longer been a part of the British Empire. Naturally, we all will be raising a glass or two celebrating the history, government, and traditions of the United States. Today we’re sharing a few Independence Day cocktails from a melting pot of brands. Just like the USA is a melting pot, we’re bringing you some delicious cocktails from Cruzan Rum, Pinnacle Vodka, Sauza Tequila, Skinnygirl Cocktails, Cascade Ice Water.

1 part Pinnacle Citrus Vodka
1 part DeKuyper Blue Curacao Liqueur
2 parts Lemon Soda
1 part Grenadine
Lemon for garnish
Blueberries for garnish
Mint Sprig for garnish
Lightly mix the vodka and lemon soda in a cocktail shaker with ice and set aside. In a tall glass, add the grenadine slowly to the bottom. Fill the glass with crushed ice. Strain the vodka soda mixture over the back of a bar spoon, followed by the blue curacao. Garnish with fresh mint, lemon rind star and berries (optional). 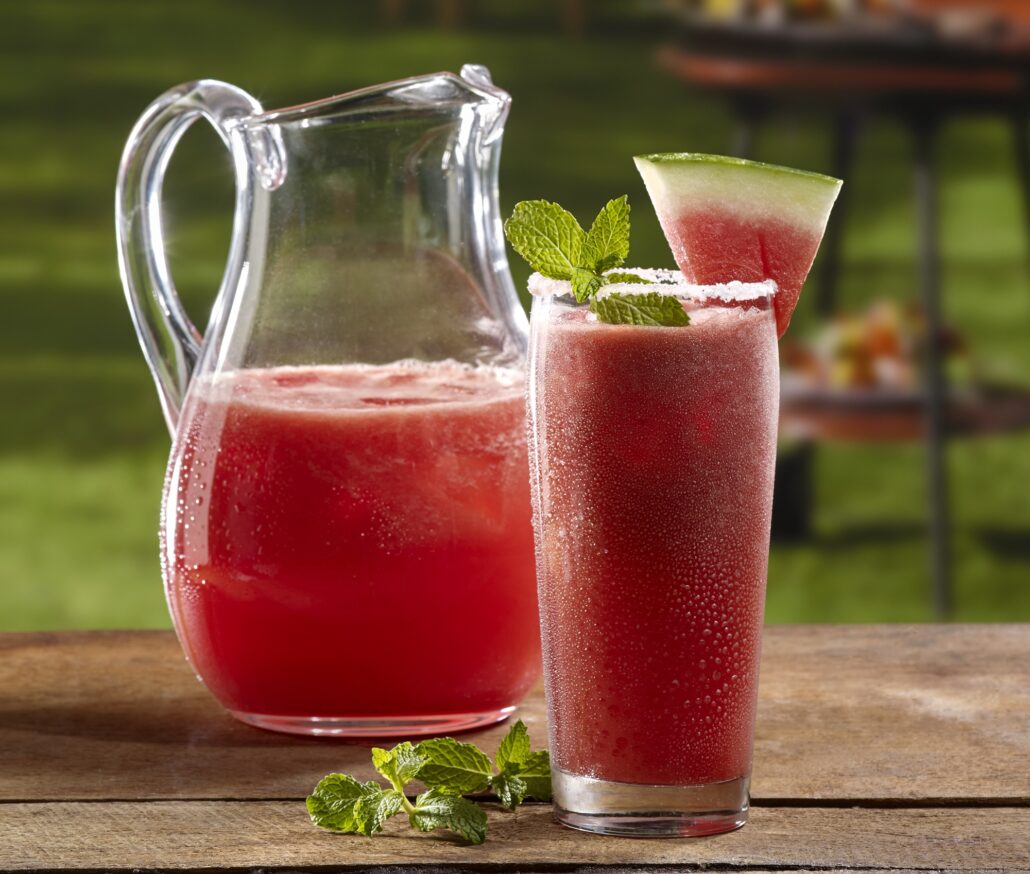 For those of you looking for lower calorie Independence Day cocktails, you’ll love the following drink recipe options from 100 calorie Skinnygirl, and zero calorie Cascade Ice. 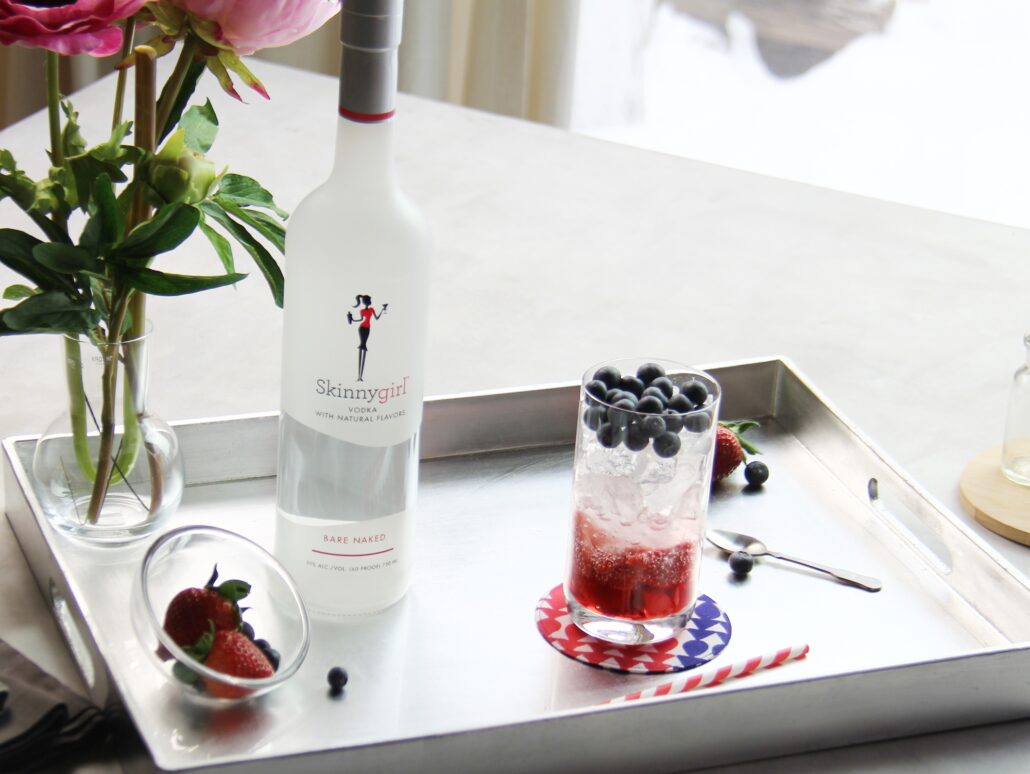 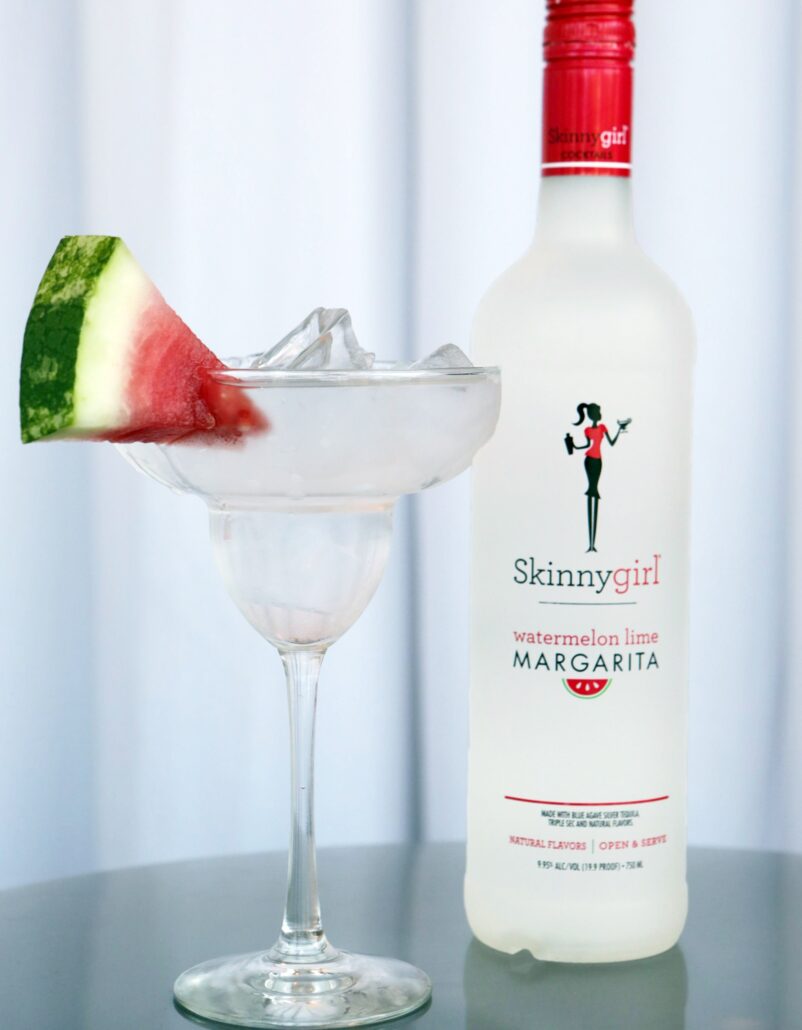 Chill Bottle
Pour over ice in a margarita glass and garnish with a watermelon and lime wedge. Serve and enjoy. 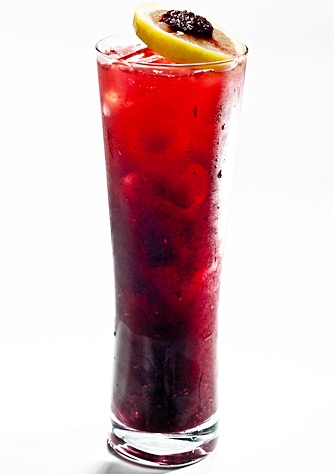 Two parts Cascade Ice Wild Berry sparkling water.
Add a splash of vodka and a handful of blueberries and strawberries.
Muddle the fruit just a bit to release the flavor and serve over ice. 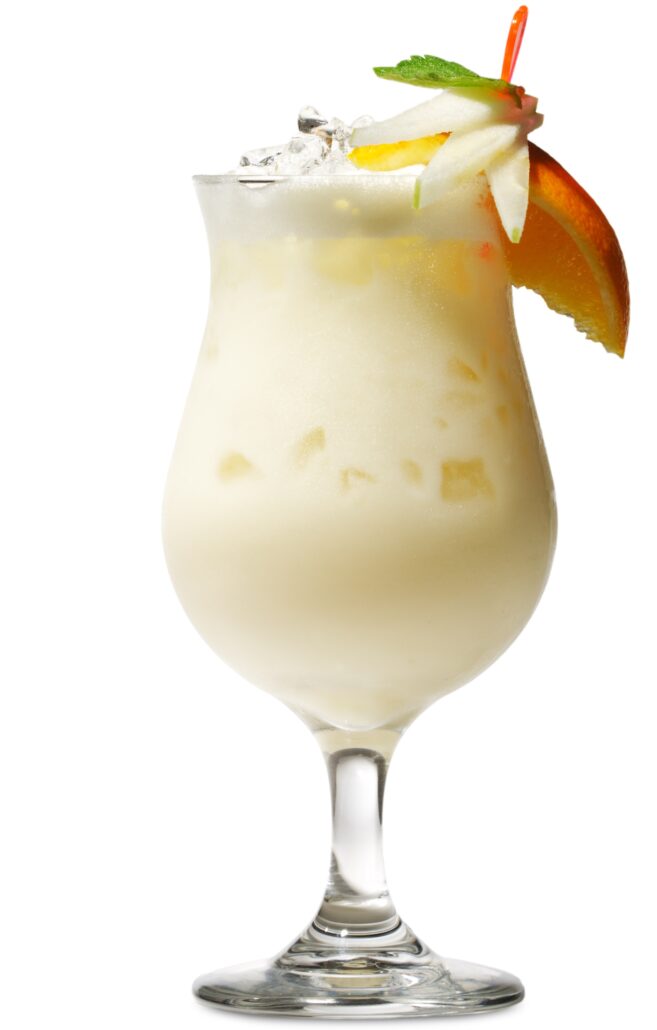 Two parts Cascade Ice Coconut sparkling water and add in one part rum, one part pineapple juice.
Stir well and serve over ice in a cold glass.
Decorate the rim of the glass with blue and/or red sugar crystals for a festive look!

Two parts Cascade Ice Coconut Pineapple and one part Blue Curacao.
Add your choice of rum with the juice of two lime wedges.
Stir and pour into a hurricane glass over ice with a cherry garnish.

Well, there you have it, some delicious Independence Day cocktails for you to try out to toast the Fourth of July. There are quite a few we can’t wait to indulge in. Which cocktails are you looking forward to sipping? 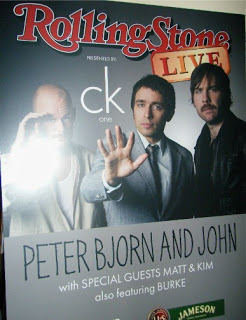 Peter Bjorn and John is a Swedish indie rock band from Stockholm and Alex and I (everyone else was either sick, working late or was too tired to hang out) were going to see them perform at the Hard Rock in Times Square. Since Alex literally worked right across the street from the Hard Rock, he got there in no time and I am so grateful for that because by the time I got there, the line was already ridiculously long. After a short wait time where all ID’s had to be checked, in we went to check our names off the guestlist, got our wristbands and headed on to the Jameson Whiskey, Rolling Stone, Harper’s Island, CKone and Pinnacle Vodka sponsored event. Already there was a nice size crowd in the darkened event space 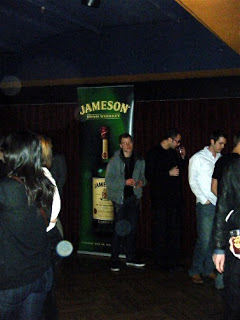 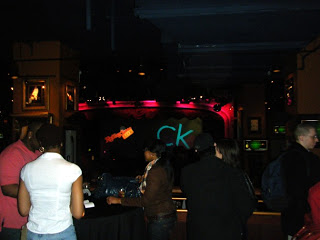 Before we hit one of the two Jameson bars we saw, I snapped quick pics of ckOne promo models and display and of course, of Alex 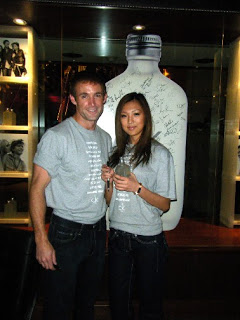 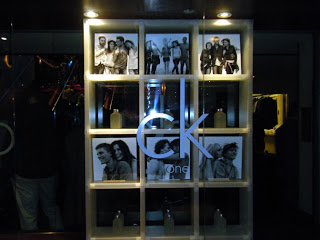 We left the bar each with a Jameson and ginger (ale) and made our way to the main floor infront of the stasge where we’d get a perfect view of the stage. While waiting for the opening act to come on stage, I took a few shots (camera, not alcohol) 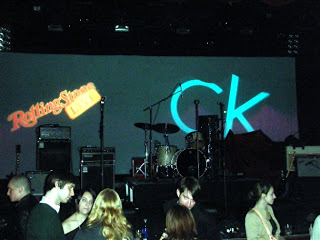 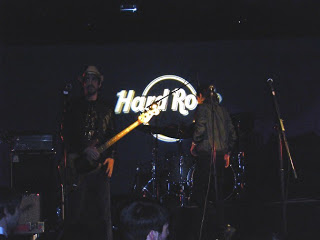 Wondered what the hell Harper’s Island was and decided it must be a cross between Lost and/or Survivor-esque shows but didn’t get to think mor eon it because a gentleman from Rolling Stone csame on to introduce the opening act, Burke (some of you gossip hounds might remember Jamie Burke, the ckOne model who dated Sienna Miller and Lindsay Lohan but don’t hold that against him). I really enjoyed their set, one of my favorite songs is called “Lovers Lose” (video #2) and the song inspired by ckOne (video #2). I got some video snippets for your enjoyment

Also got some great photos of them performing 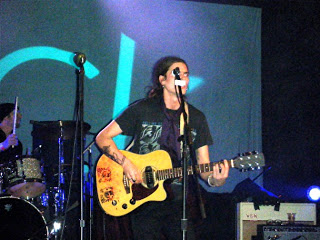 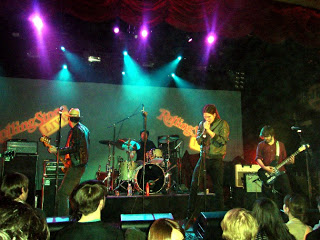 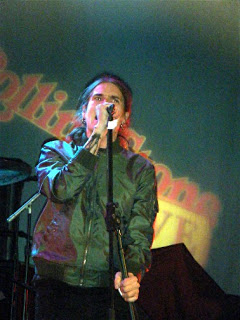 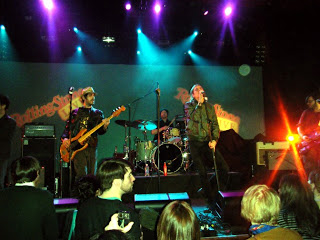 Sometime during all of this, Alex got us more drinks (really strong drinks) but we were far from tipsy then (the same couldn’t be said of a few people around us including one woman who kept on trying to touch Alex and “accidentally” bump into him…..did I mention she was at least 50-55 yrs old?) Even with that, we were having a great time

Burke played for another 10 minutes and then was off; time to set up for Peter Bjorn and John and time for another round of another Jameson & Ginger (again REALLY strong). I think the bartender was trying to save the gingerale instead of the Jameson

As the stage was being set up for them, I took a shot of the crowd that was around us and more of the stage as the band was setting up 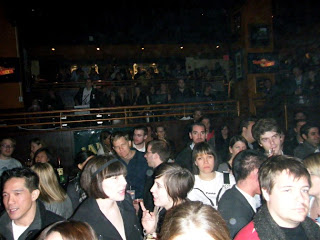 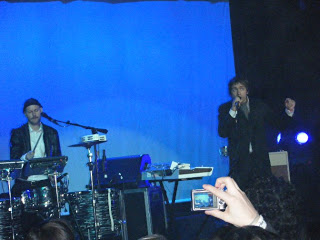 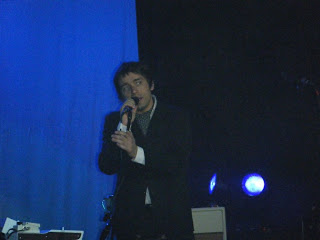 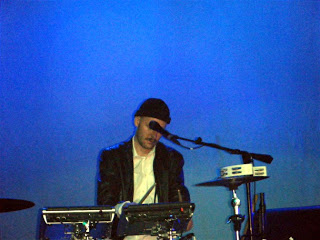 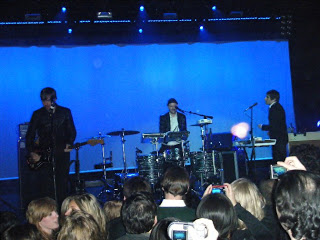 By this time, the 1000 proof Jameson was doing it’s job and luckily it came right about the time the band started playing. I got video snippets of them as well

Jameson up to full blast at this point and I had to let out a bit of the wild side, so I took a break from filming and started rocking out nonstop for at least 15 minutes then I took more photos 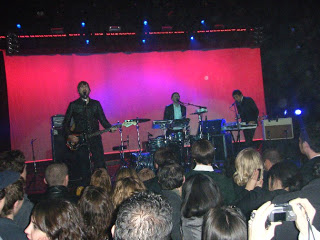 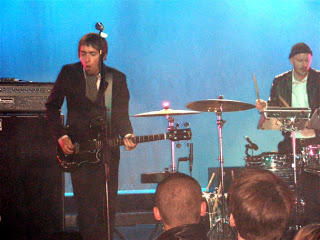 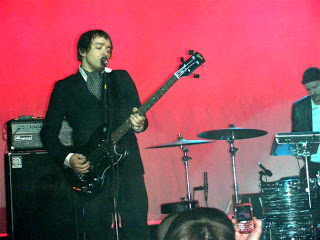 After sobering up a bit, it’s back to taking some video and what better time than for the song that made Peter Bjorn and John famous here, “Young Folks”

The crowd went wild, we went wild, it was a wild night. We pretty much left right after this song because Alex and I were beyond starving. We happily grabbed our coats, was surprised to get a giftbag 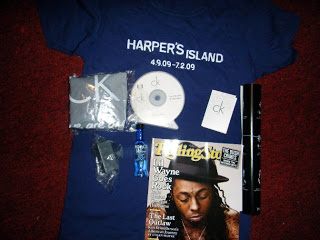 and ran out like two on the hunt scavengers. We ended up at Grey’s Papaya on 8th and devoured two hot dogs each (what is it about drunk eating that makes everything taste insanely good). All in all, a top night.